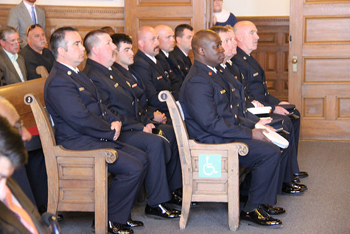 Miner: These Firefighters are the Best and Brightest of our Department

SYRACUSE, N.Y. – 12 Syracuse firefighters were promoted in a ceremony on Thursday, April 28 at 11:00 a.m. in the Common Council Chambers at Syracuse City Hall. These newly promoted officers will continue to fill the ranks of the Fire Department’s senior leadership. Among the new officers will be Deputy Chief of Fire Elton Davis, who will helm the Fire Prevention Bureau, and he will be the highest-ranking African-American in the history of the Syracuse Fire Department. 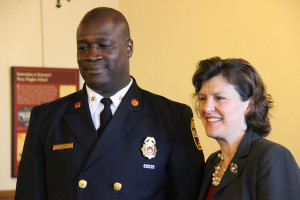 “These firefighters represent the best and brightest of our department and I am pleased to promote them to their new ranks,” said Syracuse Mayor Stephanie A. Miner. “Their hard work and dedication to this difficult work is a testament to their commitment to the people of the City of Syracuse. We owe our firefighters great thanks every day for keeping our city safe.”

“I was pleased to offer these names to Mayor Miner for promotion consideration because they represent strong leaders who will help move our Department forward,” said Fire Chief Paul M. Linnertz. “I congratulate them on this milestone and look forward to working with them in their new capacities.” 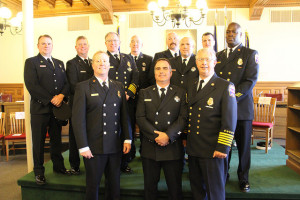 The newly promoted officers are: