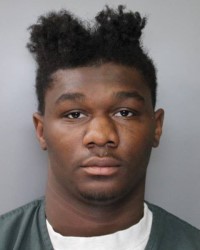 On Saturday, November 21st, 2020, at around 1:04 P.M., Officers responded to the area of the Creekwalk under the Bear St. bridge for an attempted rape call. The investigation revealed the following.

A 37-year-old female victim was running on the Creekwalk when she was attacked from behind by an 18-year-old male suspect, later identified as Edward Sholtz. Sholtz began to assault the victim and attempted to rape her. Another couple, who was on the Creekwalk, noticed the attack taking place. The couple took immediate action, and one of them, a 71-year-old male, tried to intervene.

When the male attempted to help, Sholtz attacked the male by punching him in the face, causing injury. After Sholtz struck the older male, Sholtz went back to attacking the female victim.  The 71-year-old male collected himself and grabbed a stick to try to stop the attack of the female. Sholtz saw the man approach him with a stick, and as a result, Sholtz ran off.

Officer David Ciciriello, who was responding to the call, observed the suspect on Hiawatha Blvd. near the mall. Officer Ciciriello​ tried stopping Sholtz, but he refused and fled. Sholtz then made his way into the Destiny USA pedestrian bridge knocking over two small children as he continued to run. Eventually, Officer Ciciriello was able to catch Sholtz and take him into custody with other Officers’ assistance.