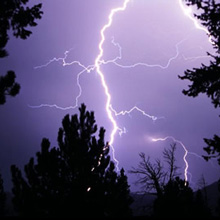 The night air was unusually thick at the 1998 New York State Fair it was after 10:00 P.M. hot and humid late into the evening. Making it home by 11:00 I was alerted to a coming storm, looking at the radar on television it was just a huge thunderstorm. The warning suddenly became a bit more frightening as flashes of lightning filled the room.  Still thinking of it as a storm, I prepared to retire for the night, tomorrow was Labor Day, the final day of my first year working at the New York State Fair.

The lightening and wind intensified, triggering a response in me where suddenly I’m out of bed, all of my clothes are back on. There was something different about this storm, the rain was pouring horizontally, and the dining room windows were being pummeled as if car wash jets were aggressively scrubbing dirt.

I looked everywhere for a flashlight, you know, the one you always see when you don’t need it? At that point things escalated when the dining room window blew inward off its track. As I pushed the window back into position, rain water  bounced off, spraying directly into my face,  fighting my attempt at getting it sealed.

Having accomplished that feat, I suddenly realized that I didn’t need a flashlight, nature provided one that night. For moments, lightening was flashing at a rapid pace, producing colors I’ve never seen in a lightening filled sky. The sky was flashing, blue, green and white in succession, suddenly my Westcott Street flat felt like a 1970’s disco complete with strobe lights.

Then there was a loud cracking sound, like a tree snapping. Then the house shook and I began to hear a creaking sound as if something were being pulled from the house or worse yet, was it going to collapse on me?

At that point in my life I hadn’t been baptized, so I had no real connection with an established church or religion. But I always kept a bible in my book case. Sensing impending doom, and the possibility of getting trapped under the rubble of a house, I quickly grabbed a heavy quilt, (made by my sister) and headed for the strongest part of the house. Once there, I realized, I’d better get the bible, if I’m trapped I’ll have something to read. Making my way to the book case I grabbed the bible and retreated to my safe hideaway.

What appeared to last for an hour was only 15 minutes in real-time, things began to calm down, I figured, okay, everything’s going to be alright.

As I crawled out from my safe space, I looked at the book I had been holding onto for dear life.  To my surprise, in my haste, I grabbed a 3 inch thick tome called, “Cooking for Vegetarians”.