Perhaps it’s the high profile of individuals passing away that has people in a sense of perpetual mourning. It appeared to be month, after month, the announcement of another icon dying …

There appears to be agreement that 2016 has been a year marked by political upset and unrest, and great bereavement in our world of popular culture. In politics, the election of Donald Trump is surprise of the year. Black Lives Matters became a force on the national level, as deaths of African-American‘s by police shootings sparked thousands of protests nationwide. Social Media is buzzing about people just wanting this year to end. 2016 has been a period marked by high profile deaths shaking the foundation of this country’s love affair with celebrity. 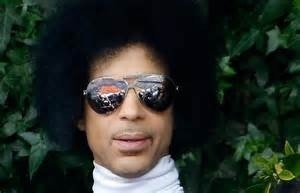 America doesn’t have official royalty however; the attention given to our culture creates pop royalty. Our obsession with lives of politicians, their offspring combined with “fanatics” for performers in music, stage and screen create this phenomenon. Why do you think they call these enthusiasts, “fans”?

Perhaps it’s the high profile of individuals passing away that has people in a sense of perpetual mourning. It appeared to be month, after month, the announcement of another icon dying cast a pall over the entire year. 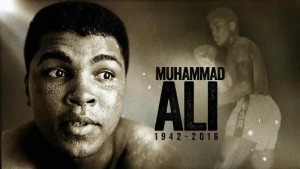 The passing of the pop legend Prince shocked the world as people posted purple tributes, lit buildings and danced in the streets of Minneapolis in his honor. Prince Rodger Nelson’s death was further indications of the problem with opiates and pain killers’ that has impacted every city and hamlet in America.

Our beloved Muhammad Ali, left us with memories of his courage not just in the boxing ring but in life. His stance against the Vietnam War caused him to lose his prime fighting years. Only to resurrect as a man who was beloved globally. Our own Oren Lyons of the Onondaga Nation was invited to participate in the funeral that attracted mourners from all faiths, political affiliation and ethnicities. 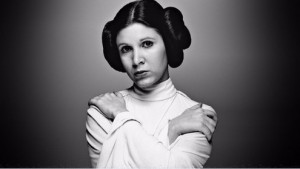 As the year comes crashing to an end we’re hit with the unbelievable tragic death of Carrie Fisher, better known by movie goers as Princess Leia from the Star Wars franchise. Her mother legendary Hollywood star, Debbie Reynolds, crushed by the news died shortly after saying, “I want to be with Carrie”.

Race to the Bottom 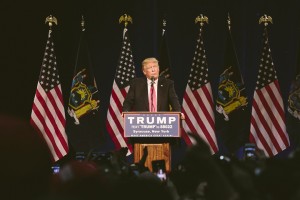 Trump at the podium during his Syracuse Rally. photo by Amelia Beamish

In politics, it’s all Donald Trump. Defying both pundits and pollsters, he pulled an amazing upset over former secretary of state Hillary Clinton. The 2016 Presidential campaign was accented by the return to “dog whistle” politics. Speaking in code Donald trump capitalized by mining fears of Americans by making derogatory remarks about immigrants from Mexico and the Middle East. He forwarded racists Tweets about African Americans and feigned ignorance when confronted by women offended by his caught on camera moment stating about women and being famous he said, “you can just grab them by the p*&^y.”

He disparaged a Gold Star family and hosted rallies that turned ugly as Trump primed the pump of hate with incendiary remarks that caused the New York Times to print two full pages of a stretch in time when he’s offended persons, places and things.  Despite all of the issues that would have sunk a traditional candidate, Trump used them to create a coalition of the angry and will be sworn in as President of the United States, Friday January 20, 2017.