Jazz Fest founder Frank Malfitano announced that the 2017 M&T Syracuse Jazz Fest at OCC in 2017 will be dedicated posthumously to Oscar L Peterson, longtime Syracuse Jazz Fest Board President and jazz DJ at Syracuse University NPR radio station WAER-FM. “Oscar was truly a one-of-a-kind individual and the kind of irreplaceable human being that touched everyone he met in a positive way,” Malfitano said, “and he was the kind of special friend that comes along once in a lifetime, and an unforgettable and irreplaceable colleague who served jazz fest in countless ways and inestimable fashion for the past 30 years.”

The sad news is that Oscar L. Peterson Jr., Jazz Fest board president, won’t be around to witness the 35th anniversary edition. Peterson died Oct. 3, 2016, eight days short of his 55th birthday. “Oscar was my brother from another mother, and my best friend for more than three decades,” said Malfitano. “On a personal basis, his loss is unfathomable, but his spirit and ever-present smile will stay with me all of the remaining days of my life.” 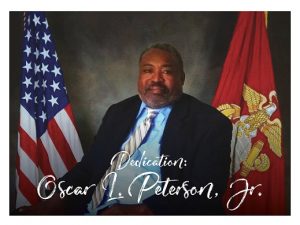 Peterson is best remembered for his 10-year run as Jazz Fest board president, as well as his former gig with WAER-FM 88.3 as the weekly host of his Jazz Express program, which would always open with Peggy Lee’s sultry composition “I Love Being Here With You.” Malfitano’s friendship with Peterson began in the mid-1980s when both collaborated on two seasons of the critically-acclaimed Jazz At The Center series at the John H Mulroy Civic Center.

Prior to succumbing, – after a long, valiant and courageous battle with multiple health issues – Peterson, a Philadelphia native and Marine Corps veteran, also served as vice chair for the city of Syracuse’s Republican Party. Along the political trail, the wheelchair-bound Peterson switched paths and parties and ran as a primary candidate on the Conservative line in the 2015 Onondaga County executive race. And, despite being hospitalized at the VA for much of the previous year, Peterson managed to make it to the 2016 Press Conference and to the festival, where he was once again greeted by an adoring legion of fans, friends and national artists who all knew him well and loved him unconditionally.

“Semper Fi ‘Pete’…we’re honored to dedicate this year’s Jazz Fest to you. No one deserves it more!” 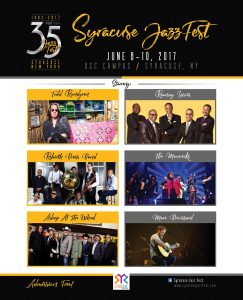