For many constituents, this will be the first time to hear congressional candidates, Scott Comegys, Dana Balter and Anne Messenger in a public forum setting on progressive issues pertinent to Syracuse and the Central New York area. For others, this will simply be another day to further narrow their democratic choice come November.

“I hope that we’re able to introduce the candidates to citizens who aren’t traditionally voters,” Uplift Syracuse Co-Founder, Maurice Brown, said. “We feel that not often enough the candidates listen to all their constituents, so we’re trying to branch out and spread their message to a larger, more new-to-politics community.” 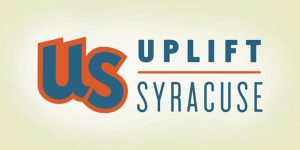 Uplift Syracuse is a progressive advocacy group, pushing for legislative and electoral change at the city, county and state level.

The organization is the Central New York branch of the New York Progressive Action Network – NYPAN, coordinating with their statewide group.

Uplift Syracuse is a grassroots network looking to push for progressive changes, hope to see in New York; including a single payer healthcare system, a transition to renewable energy, increased educational funding and equality, housing and economic justice, and reversing the trends in urban segregation.

CNY Solidarity Coalition is a grassroots coalition of organizations and individuals committed to protecting all Central New Yorkers from the dangers of the Trump-Pence-Ryan administration’s policies, appointees, and rhetoric.

The organization is dedicated to truth, justice, and democracy and aim to protect and fight alongside people of color, immigrants, refugees, LGBTQI people, the Muslim community, the Jewish community, women, people with disabilities, people with mental illness, the deaf community, teachers, scientists, environmentalists and all other marginalized and oppressed. groups and entities that are likely to be targeted in these uncertain times