Syracuse, N.Y. – On August 4, 2022 at 12:09 p.m., Syracuse firefighters were alerted by the 911 Center to possible fire with multiple 911 callers at 1500 Ivy Ridge Road. While enroute, the operations chief called for a 2nd alarm assignment due to the volume of heavy black smoke visible from E. Brighton Ave. Fire companies from Station 8 (S. Salina St.) arrived in under three minutes to find a three-story, wood-framed building with heavy fire on the top two floors. The roof had failed and partially collapsed by the time companies arrived. There was a similarly sized exposure apartment building, 1502 Ivy Ridge Road, sharing an entire wall with the fire building.

Fire had not spread to this exposure building upon arrival and occupants were evacuating. 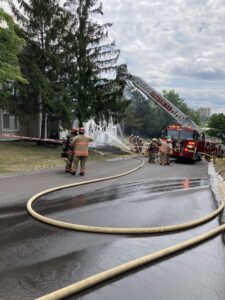 Firefighters from Truck 8 entered the fire building but were ordered to evacuate by the operations chief due to fire conditions and partial building collapse. Teams from the Rescue Co. searched the exposure building for victims and assisted an occupant by retrieving her pets from her apartment. Firefighters used handlines, multiple portable and aerial-mounted master-streams to extinguish fire and prevent spread to the attached exposure building. The additional 2nd alarm companies were tasked with ensuring a steady supply of water, using thousands of feet of supply hose. A single master-stream device can flow up to 1,250 gallons per minute; that’s equivalent to filling an average-sized bathtub in two seconds.

After the bulk of fire was extinguished, Rescue Co. firefighters entered the fire building to search for victims on the 1st and 2nd floors; there were none. Fire spread to the adjacent apartment building was stopped effectively by firefighters. Crews remained on scene for extensive overhaul and extinguishing pockets of fire. There were no injuries to firefighters or occupants. The fire is under investigation by the Syracuse Fire Investigation Bureau.

Syracuse was under a heat advisory today putting additional strain on our firefighters. In total, 65 firefighters, including chiefs and support staff, were on scene of the fire today. SFD’s EMS Division and American Medical Response (AMR) ambulance set up a rehabilitation area and 53 firefighters were assisted in checking vital signs, hydration, and cooling so they could keep working at the scene effectively. We thank our partners at the 911 Center, National Grid, Syracuse Police, AMR and the American Red Cross. The American Red Cross is working with 14 residents that were displaced and secured access to a nearby recreation center to help those residents shelter from the heat.