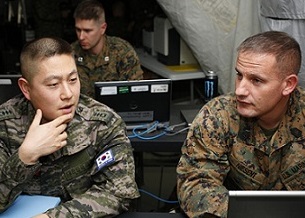 SYRACUSE, NY (03/06/2017) (readMedia)– Forty Soldiers from the New York Army National Guard’s 27th Infantry Brigade Combat Team, which is headquartered in Syracuse and has units across New York, are heading for South Korea to participate in a joint U.S. and South Korean military command post exercise.

Known as Key Resolve, the annual event is a computerized exercise which begins March 6 and supports the defense of South Korea. Key Resolve rehearses the deployment, reception, staging and integration of military troops deployed from the United States to support the Republic of Korea in the event of a war.

The officers and noncommissioned officers will carry out the same kind of command functions they would be required to conduct during an actual mission involving the 3,500 Army National Guard Soldiers based across New York who are part of the brigade.

Twenty-six officers and noncommissioned officers will represent a brigade headquarters of the U.S. Army’s 2nd Infantry Division during the exercise.

Fourteen officers and noncommissioned officers from the brigade’s seven battalions will “play” battalion headquarters during the computer command post exercise.

Key Resolve is held in conjunction with exercise Foul Eagle, which involves the actual movement of American and South Korean forces.

Key Resolve has been an annual training exercise between the two nations since 2008.

New for the training this year will be the leadership of the South Korean Joint Chiefs of Staff (JCS). The Korean JCS will lead the combined military exercise.

Seoul’s Joint Chiefs of Staff will be responsible for exercise planning and control, operation of opposing forces, and after-action reviews. The Korean forces headquarters will operate from a command center within South Korea’s Capital Defense Command.

The New York Soldiers are expected to redeploy home from after the Key Resolve exercise on March 18.