Patrons Encouraged to Participate in Passport Contest to Win Prizes

Syracuse, NY – The Downtown Committee of Syracuse, Inc. and Visions Federal Credit Union are partnering to present the first edition of Delicious Downtown Deals, to celebrate the delicious, high-quality cuisine that Downtown Syracuse is known for. The promotion begins today, Monday, February 1 and continues all month long, through Sunday, February 28.

In total, 43 Downtown Syracuse restaurants are participating, including five new restaurants that just opened at the Salt City Market. The specials and deals vary from restaurant to restaurant. Some restaurants are offering package deals, including fun pairings for $20.21, playing up the new year. Others are serving up three course lunches and dinners at a fixed price point, similar to what the community has come to expect during the traditional “Downtown Dining Weeks” promotion, which the Downtown Committee and Visions Federal Credit Union plan to present later this spring. All Delicious Downtown Deals are posted at the website, DowntownSyracuse.com.

*A complete list of participating restaurants is included in a poster accompanying this email.

As part of the promotion, the Downtown Committee is also hosting a Passport Promotion Contest.

Here’s how the contest works: Throughout the month of February, as members of the community visit one or more participating restaurants, they can earn stickers provided by the restaurant when they purchase a restaurant’s specified “Downtown Deal.” 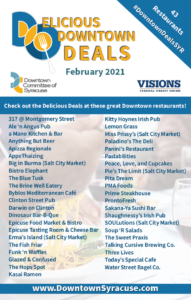 Passport Cards may be picked up at participating restaurants, or downloaded here, at the Downtown Committee’s website. To redeem passports, please email a picture of your card (front and back) to the Downtown Committee at Mail@DowntownSyracuse.com. If you don’t have a smartphone, please mail it to the Downtown Committee of Syracuse, Inc. at 115 West Fayette Street, Syracuse NY 13202 c/o “Passport Promotion.” All submissions must be received by March 1. The drawing will be held during the first week in March.

“Right now, there is an exciting energy in our community as we continue to show our love for our local restaurants, retailers and the cultural institutions that make this city center so special,” said Merike Treier, executive director of the Downtown Committee of Syracuse. “We plan to hold the traditional Dining Weeks promotion later this year, but we didn’t want to miss out on celebrating the flavors that so many have come to look forward to each year around this time. We hope you’ll visit your favorite restaurants – and discover new ones – in whatever ways you and your families are most comfortable with. Enjoy dining in, curbside pick-up, and/or takeout!”

Meal and a Museum: In addition, four museums are also joining the “Delicious Downtown Deals” campaign. Throughout the month of February, visitors are encouraged to visit any of the participating restaurants to pick up a pass that will grant them a 10% discount at the Onondaga Historical Association’s Gift Gallery or at the Erie Canal Museum, One Free Admission at The Museum of Science and Technology, or One Free Admission at the Everson Museum of Art. “Meal and a Museum” passes are only available at participating restaurants.