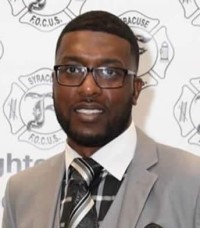 As the current County Legislator for the 16th district, I understand what it means to listen to the concerns of constituents impacted most by the disastrous policies of the past. On I-81, my stance has always been clear because my constituents have always been clear. Removing the viaduct is the first step towards meaningful change in a community that has too often been ignored.

To rename the skybridge – an idea introduced by the wealthy donors at Save 81, Destiny USA, and those outside of our City – after an iconic woman, leader, and fighter for freedom, Harriet Tubman is a slap in the face. What freedom does the skybridge give this community? Harriet Tubman spent her life releasing people from bondage. This ridiculous proposal would keep our people in today’s version of it for generations to come.

Racism looks different today than it did in Tubman’s day. Racism is continuing to condone an elevated highway through the middle of a Black community that is putting toxins in Black children and poisoning Black neighborhoods.  The skybridge only perpetuates racism for an entire community, for the convenience of a few.

It is disgraceful to use such an iconic woman and her legacy to continue to harm a community.   Charles Garland is clearly not listening to the constituents in the 16th district.  He has not been able to identify any benefits to this community from the Skybridge option. In fact, a simple look into the DEIS, Chapter 5, shows that the removal of the viaduct significantly reduces the traffic volume in this community from the current 90,000 cars per day to about 36,900 per day.

Charles Garland’s remarks are dangerous, irresponsible, and uninformed. In his own remarks at the press conference this morning, he put the needs of the Town of Salina over the people of the 16 district. I will never sell out my own constituents like that – ever.

The skybridge option under any name will continue to pollute a Black community, divide neighborhoods by race and class, concentrate poverty, and, most importantly, ignore the voices of the 16 district. I will oppose it with every tool at my disposal as your County Legislator and as your neighbor.