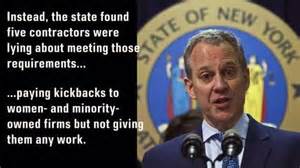 Schneiderman: We Will Continue To Aggressively Enforce The Law Against Contractors Who Game The System

An investigation by the Attorney General’s Office (OAG) found that the contractors submitted bid proposals, presented pay applications, and/or arranged false sub-contracts in connection with the RSMP that misrepresented their utilization of EBEs, in violation of both the RSMP’s Diversity Plan and state law.

“Women and minority owned businesses have historically been shut out of government contracts for all the wrong reasons.  That’s why our state, and localities, implement reasonable diversity standards to level the playing field.  These contractors engaged in flagrant schemes that flouted the diversity rules they were required to meet, and in the process, denied minority- and women-owned businesses a fair shot at winning valuable sub-contracts,” said Attorney General Schneiderman. “My office will continue to aggressively enforce the law against contractors who game the system.”

For example, Concord Electric claimed credit for over $400,000 worth of work purportedly performed by B.S.V. Metal Finishers (BSV), a certified MBE supplier; but in reality, Concord actually ordered the supplies directly from a non-EBE (Zeller Corporation). Concord dealt solely with Zeller in the selection, pricing, and delivery of materials. In many instances, BSV supplied blank letterhead, and representatives from Zeller put their quotes on the BSV letterhead to give the appearance of BSV’s participation, when in fact BSV served only as a pass-through entity.  Meanwhile, Concord paid a percentage of the contract to BSV, although BSV had served no commercial function.

The monetary terms of each settlement agreement are as follows:

Also as part of the settlements announced today, Hewitt Young Electric, Manning Squires Henning, and Mark Cerrone will fund a total of $400,000 in reserves, which will assist EBEs in meeting their costs, helping them to take advantage of sub-contracting opportunities. This is an innovative program designed by the Attorney General to address the difficulty of small-business sub-contractors which must regularly pay their labor force, but are often forced to “float” months of salary while awaiting payment from the project’s developer and then the prime contractor. These long periods of outlay are often too much for small M/WBEs to endure.  To address this difficulty, the Attorney General has secured an agreement from these prime contractors to fund a “reserve” from which M/WBE sub-contractors can draw in order to make their payrolls. Then, when the prime contractor is eventually paid by the RJSCB for an M/WBE’s work, it will replenish the reserve.

Thirteen Rochester schools were renovated during the largely-completed first phase of the Rochester Schools Modernization Program, which was budgeted at $325 million, including $278 million in State funds.

The Attorney General thanks the whistleblower who shed light on these serious violations of the law and for assisting the OAG in its investigation. The Attorney General also thanks the RJSCB for its efforts and its consistent support of the OAG’s investigation under the leadership of the Board Chair, Allen Williams, and its former Chair Thomas Richards. Specifically, the OAG appreciates the valuable and substantial assistance provided during the course of its investigation by the RJSCB, including the Board’s sharing and presentation of its extensive forensic audit. In light of the damages suffered by the RJSCB as a result of these contractors’ conduct, a portion of the monies recovered in the settlements will be distributed to the RJSCB as restitution.

Allen Williams, the Chair of the RJSCB, said, “The settlements announced today are the result of the joint efforts of the Office of the New York Attorney General and the Rochester Joint Schools Construction Board. The Board is proud of its Diversity Plan, which has ensured that minority-owned, women-owned, and disadvantaged business enterprises, as well as women and minorities in the workplace, have meaningful opportunities to participate in the Rochester Schools Modernization Program. Efforts to defeat those important requirements by circumventing the Board’s workforce and business participation goals will not be tolerated. As we move into Phase II of the Program, we will be actively monitoring the diversity requirements to ensure that no wrongdoing occurs. We thank Attorney General Eric Schneiderman for his leadership in vigorously investigating and exposing efforts to subvert the Board’s Diversity Plan.”

Thomas Richards, former Chair of the RJSCB and its Special Committee partnering with the Office of the New York Attorney General, said, “We thank Attorney General Schneiderman for his dedication and hard work on this important issue. The Rochester Joint Schools Construction Board has worked closely with the Attorney General’s office throughout this investigation.  We are proud that the Board has been able to assist the Attorney General in promoting compliance with the Diversity Plan and combating allegations of wrongdoing.”

A whistleblower alerted the OAG to this conduct and filed a qui tam lawsuit.  The Modica Law Firm represents the whistleblower.  Steven V. Modica, Esq., principal of that firm, said, “I thank Attorney General Schneiderman and his team for pursuing this important case. The State is committed to addressing the historical disadvantage experienced by Minority and Women owned businesses in the construction industry.  There’s no place in New York for those who seek to sabotage this commitment for their economic benefit.”

The investigation leading to the settlements announced today, which address both the civil rights issue and the waste of taxpayer money, was conducted by the Taxpayer Protection Bureau, which Attorney General Schneiderman established in 2011 to combat the fraud and abuse of taxpayer dollars, and by the AG’s Civil Rights Bureau.

The OAG’s investigation, and the settlements announced today, was not connected to the RSMP’s Project Labor Agreement (“PLA”). Given the pending litigation with respect to Phase II, the Attorney General has no comment on the PLA.

The Attorney General’s investigation into diversity fraud on the RSMP is ongoing.

The company in charge of Syracuse’s School Renovation Project is the same company,  The same company that received a extremely critical report of the MWBE Contract Compliance programs among other construction management issues.

Windell Gray: President and CEO of Landon & Rian, the compliance officer overseeing diversity contracting and hiring. A critical audit appeared to show the firm was not up to the task. The firm was underbid last year and has been replaced.

Editors Note: Gilbane, despite having experience in Albany, Buffalo and Syracuse, was ineffective in forecasting workable timelines, never seemed to grasp the full scope of the project, delegated considerable responsibility to construction managers and additional consultants (possibly at additional cost), appeared ill-informed about state funding processes and waived district standards to meet budget. One contractor told auditors the quality and timeliness of direction from Gilbane was “abysmal.” The company at the time headed by Wendell Grey

According to the Democrat and Chronicle “In lengthy responses to the audits, Landon & Rian and Gilbane blamed nearly impossible conditions, a steep learning curve and auditors’ inaccuracies.

Landon & Rian President Windell Gray provided a written response that blasted the report as “neither accurate, nor thorough,” saying the evaluation was “done in a rushed and haphazard fashion.”

Eleven times in his 24-page response, Gray referenced an email from the auditor that acknowledged having overlooked a file cabinet containing more than 100 documents.

Gray remains on the project, finishing paperwork on the completed projects. His firm released a statement noting its 15 years of experience, but did not directly address the criticisms.”