SYRACUSE – Attorney General Eric T. Schneiderman today announced that he filed a lawsuit against Joseph Funding Company, Inc. and its owners Rebecca Ausby and Joseph Holman for allegedly engaging in a deceptive scheme to trick New Yorkers into turning over ownership of their homes to the Syracuse-based real estate company. The lawsuit alleges that Ausby and Holman preyed on homeowners who were struggling to pay their mortgage, at risk of foreclosure, or interested in getting rid of hard-to-sell properties without any profit or loss.

The complaint – filed in Onondaga County Supreme Court – alleges that Ausby and Holman promised consumers that they could manage properties prior to a sale by finding tenants, collecting the rent, and paying the consumer’s mortgage. However, an investigation conducted by the Attorney General’s office uncovered that Ausby and Holman allegedly used these services as a guise and later duped consumers into transferring their property’s deed to Joseph Funding Company. These deceptive practices allegedly resulted in at least five homeowners losing ownership of their homes, while remaining fully responsible for the mortgage payments. 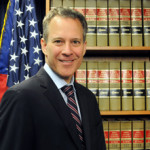 “As we allege, Joseph Funding Company and its owners led consumers to believe they were acting in their best interests – but in actuality they stole properties from vulnerable homeowners, destroyed their credit, and then left them holding the bag on their mortgages,” said Attorney General Schneiderman. “My office will not tolerate those who prey and capitalize on homeowners, and I encourage all New Yorkers to consider our tips to avoid scams.”

According to the homeowners, Holman and Ausby presented themselves as real estate professionals, who had extensive experience managing properties and buying and selling homes, including homes in economically depressed neighborhoods. The company’s owners frequently posted signs on neighborhood telephone poles advertising that they buy and sell homes fast. Homeowners who contacted the company were greeted with a recorded voicemail message stating that Joseph Funding Company could take over their mortgage payments right away. Additionally, the company’s website identified dozens of properties that they were managing or had recently sold or rented. However, as the Attorney General’s complaint alleges, Joseph Funding Company has no connection to most of the properties listed on their website. Furthermore, neither Holman nor Ausby are licensed by the New York State Department of State as real estate professionals and therefore are not authorized to manage or sell properties for others in New York State.

The Attorney General’s investigation further revealed that Holman and Ausby allegedly deceived consumers by offering to manage the homeowners’ property prior to the sale by finding tenants, collecting the rent and paying the consumer’s mortgage throughout the process, which they claimed usually takes a year to 18 months. 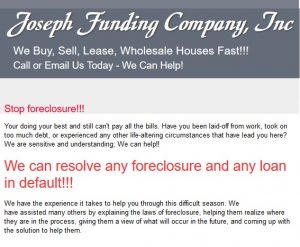 The complaint alleges that, during this time, Holman and Ausby would present paperwork for the consumers to sign that included a deed transferring ownership of the property to Joseph Funding Company. After taking complete ownership of the property, Holman and Ausby did not take any responsibility for making the mortgage payments. The company typically paid the homeowner’s mortgage for a few months to a year; then they made payments erratically and, eventually, stopped. Holman and Ausby continued to own and rent the properties for monthly income, but did not pay the monthly mortgage, nor did they inform consumers that they stopped paying the mortgage. In fact, several consumers did not know that they had defaulted no their mortgages until they experienced problems with their credit or were sued in a foreclosure action. 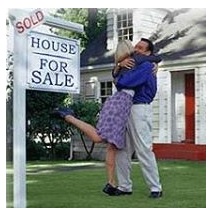 Additionally, Holman and Ausby allegedly promised consumers that they could stop foreclosure and come up with solutions to help people in default. New York State Real Property Law regulates “distressed property consultants” and requires that such consultants have written consulting contracts that include specific disclosures. Online advertising is also regulated and must disclose to homeowners that government-approved housing counselors may provide the same services for free. Joseph Funding Company did not have the required contracts and disclosures. One homeowner who was in default on his mortgage was allegedly led to believe that he had sold his home to Joseph Funding Company, and that Ausby and Holman would pay the bank directly for the property. Unbeknownst to him, he gave away his property for free. Holman and Ausby did not pay the bank at all, and the bank foreclosed on the property.