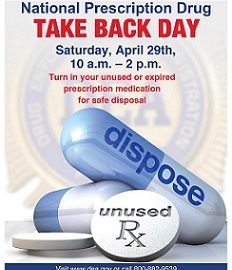 National Prescription Drug Take Back Day is Tomorrow, Saturday, April 28 from 10AM to 2PM; There Will Be Two Dozen Disposal Sites in Buffalo Area Alone

Buffalo, NY– Attorney General Eric T. Schneiderman today announced the launch of ClearYourCabinet.com, a new statewide initiative and website dedicated to helping New Yorkers safely dispose of prescription drugs, ahead of tomorrow’s National Prescription Drug Take Back Day. As part of Attorney General Schneiderman’s multi-levered approach to tackling the opioid epidemic, the initiative is aimed at helping New Yorkers take one of the simplest steps to prevent addiction by safely disposing of their unused drugs at drop-off sites around New York – including at two dozen sites around Buffalo. According to the American Society of Addiction Medicine, four out of five new heroin users start out by misusing prescription drugs; and according to the 2015 National Survey on Drug Use and Health, a majority of abused prescription drugs were obtained from family and friends, often from the home medicine cabinet. 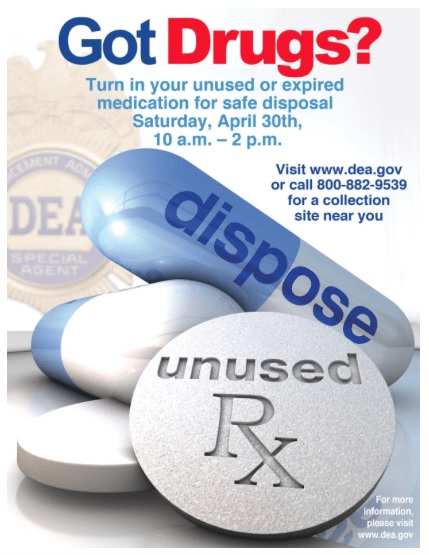 “Getting unused prescription drugs out of your home can stop an addiction before it starts,” said Attorney General Schneiderman. “I am asking every New Yorker to check out their medicine cabinet, identify any unused prescription drugs, and then visit clearyourcabinet.com to find out where you can safely dispose of them this Saturday. These simple steps can help prevent addiction and save lives.”

Building on national efforts to encourage Americans to bring unused prescription and over-the-counter drugs to designated sites for safe disposal, Clear Your Cabinet gives New Yorkers new tools to find their nearest drop-off locations and request email or text message reminders to go and dispose of their unused medication. The next National Prescription Drug Take Back Day is this Saturday, April 28th, 2018 from 10:00AM to 2:00PM.

Attorney General Schneiderman’s Clear Your Cabinet initiative was launched through a collaboration with volunteers from some of New York’s leading tech startups after a hackathon focused on the opioid crisis and hosted by the Attorney General’s office in March 2018. In particular, the Attorney General would like to thank the organizers of Progressive Hacknight and Civic Hall for their assistance in this project.

In coordination with the Drug Enforcement Administration (DEA) and the New York State Department of Environmental Conservation, law enforcement agencies, national and community pharmacies, non-profits, and other institutions across New York will be hosting safe drop-off sites for New Yorkers to bring unused medication this Saturday, April 28th from 10:00AM to 2:00PM. Many of these sites will also collect unused medication year-round. To find a location near you, go to ClearYourCabinet.com.

Disposal of unused prescriptions and over-the-counter medication at these locations is no questions asked and free. New Yorkers cannot bring illegal drugs or needles and sharps (for more information on the disposal of needles/sharps, click here). As a last resort, for communities without a safe disposal site nearby, the New York State Department of Environmental Conservation recommends mixing medications (do not crush tablets or capsules) with water and then adding salt, ashes, dirt, cat litter, coffee grounds, or another undesirable substance, to avoid accidental or intentional misuse of drugs. To prevent unintentional consumption by scavenging humans, pets, or wildlife, do not conceal discarded drugs in food. Their full guidance is available here.

During the last National Prescription Drug Take Back Day in October 2017, more than 450 tons of unused medication were collected across the country. Over 42,000 pounds of unused medication were collected in New York State alone; that’s the same weight as seven heavy-duty pick up trucks. By comparison, the largest criminal drug bust in the history of the New York Attorney General’s office took approximately 70 pounds of heroin and fentanyl off the street.

“We are dealing with a deadly epidemic in Western New York that is directly linked to prescription drugs,” said Erie County District Attorney John J. Flynn. “One of the ways we can combat this growing problem is through prevention. By properly disposing of prescription medicine, you stop those pills from getting into the wrong hands – and hopefully stop someone else from falling victim to opioid addiction.”

“As we continue to fight the opioid crisis that is devastating families across our state and nation, we must also continue to take steps to prevent these drugs from falling into the wrong hands in the first place,” said Senator Tim Kennedy. “I encourage Western New Yorkers to participate in National Prescription Drug Take Back Day tomorrow by bringing outdated or unused prescription drugs to one of these safe, designated locations, and I thank the Attorney General and his office for making this program accessible in our community.”

“Prescription drug take back days are an important tool in our fight to end the opioid epidemic,” said Avi Israel, President of Save the Michaels of the World. “Leaving prescription drugs in your cabinet is like leaving a loaded gun on your counter. Find a take back location near you, make the short drive, and remove them from your home.”

“Providing New Yorkers with access to safe pharmaceutical disposal options is critical to ending the antiquated practice of flushing drugs, which is polluting our Great Lakes and adversely impacting aquatic life,” said Brian Smith, Associate Executive Director for Citizens Campaign for the Environment. “We urge the public to take advantage of take back days and drug drop boxes at pharmacies and police stations in order to protect the health of our waters. CCE commends Attorney General Schneiderman for his work to address this critical environmental and public health issue.”