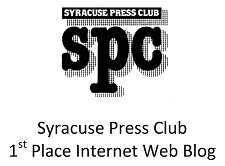 My section of the city has no name. I mean, what the heck is the Far West Side?  Anyhow, old-time Syracusans call it the “West End.”

Other neighborhoods erect classy signs that identify the community.  South of West Genesee Street is Tipperary Hill, a traditionally Irish neighborhood where statues commemorate historic events and an upside-down traffic signal places green above red. Nice signage introduces us to The Valley, Salt Springs, Eastwood and Strathmore. On the Nort’ Side, we’ve invested millions in a concept called “Little Italy.”

Downtown has gone development crazy with condos, a brand spanking new hotel and new restaurants. The sound of change – the echo of hammers and jackhammers – is audible as we walk down the street. They’re installing new curbs.

Are we witnessing a Curb-apalooza? A Curb-athon? Maybe “The Affordable Curb Act,” Curb-zilla, Curbs of the Living Dead.  Will we see DNA-infused curbs run wild in Curbassic Park? Seriously, I have street curbing etched into the retina of my eyes.

On West Genesee Street at Erie Boulevard a supposedly 11- foot-6-inch bridge is having some work done, but not on the bridge. After decades of tractor trailer after tractor trailer cashing into the overpass, someone got the bright idea to lower the road!

At South Salina Street and East Colvin, business owners and community members meet resistance to their plan to build a community park next to Beauchamp Library. Investors have poured piles of money into this corner hoping to develop a community treasure.  African-American-owned businesses are transforming South Salina into a place where commerce and community merge.  A barber shop, an upscale wine & spirits shop, a convenience store and a new coffeehouse fill have already sprung up nearby.

Onondaga County’s coffers grow from the sales tax revenue generated by shoppers at the much-maligned Destiny USA.  We should be happy; we have new curbing for everyone. A shining new mall filled with bright, shiny new things to buy. “Just put your cranes in the air, and wave them like you just don’t care.”

Under the glitz and glamor of our city’s renaissance lay the underpinnings of civil unrest and economic depression. This is a tale of the two cities of Syracuse.

If you are black or white and young, however, there is no glitz or glamor.

With our manufacturing base a mere memory, unemployment has skyrocketed. Our public schools have “miss-educated” generations of African-Americans possibly bound to a life of poverty and despair. Recent improvements have included the hiring of a school superintendent who’s changing the conversation. She’s raising our expectations and those of our students. Isn’t that what a leader should do?

We can say yes to education, but unless city officials can guarantee a safe pathway to school, all of these dollars and all of these initiatives may be wasted.  Drive by Fowler High School’s nearby commercial plaza after school. Almost every day there’s a fight there. And these are not just one-on-one encounters. These are mass gatherings. The fights often draw more than 100 people, and there are no police.

If you are older than 55, don’t you dare take a walk to bodega.  It’s not safe. As a so-called “junior- senior” at age 56 I’m being told, “Don’t go to the store at night. Stay away from the stores.” Don’t we have the right to walk, stroll, run, sashay or shop anywhere in this community without warnings, without fear?

Every commercial district in this city should have publically paid security staff walking the street, these are called Police Officers. Business owners should not have to pay a “fee” for what citizens expect as a deliverable — quality of life. These are our shopping districts, or bastions of capitalism. It should be a priority to keep these places safe — but it’s not.

Even though the city’s publicizes bodega inspections, many stores still lack flooring. One basement store sits on dirt while others sell “hairy” chicken wings.  And since when did Mike & Ike candy qualify as Food Stamp purchasable?

The city has installed new curbing and sidewalks, but did anyone consider how many customers a business must attract before making a sale? Every day customers can’t get to the door, the establishment loses dollars. How many Westcott Street businesses will remain financially secure after the recent slow-motion curb-athon?

With the election in our rear-view mirror, Onondaga County Republican’s TV ads bragged about the millions of dollars they’ve saved for taxpayers. They seem to forget the devastating cut of the Human Rights Commission a couple years ago. In that same “We Are the County” commercial, big sister tried to play a Jedi Mind trick on us all:  “Everything is O.K. Everthing is fine!”  But it’s not!

At the end of the ad they warn us, “We’re just getting started”!

We’ve invested millions in our infrastructure, given millions away in tax credits and may add another wing to the Justice Center, but what have we done for the poor? Constructed new temporary housing? If you’re poor you might as well live under a bridge, and some actually do. The working poor face even greater hardships. How would you feel after laboring all week and still not make enough money to provide for your family? Our so-called “Living Wage Law” is about as protective as a moth-eaten umbrella.

There was a time when city residents were employed thanks to Community Development funds to provide basic services such as HEAP information or distributing government cheese. These programs spread a little cash around our poorest neighborhoods. If they were running today they’d be providing information about the Affordable Health Care Act a.k.a Obamacare. Job coaching and/or training could have been mobilized from those locations.  Those jobs no longer exist in the underserved community.

In Syracuse and Onondaga County we are good when investing in “bricks and mortar” projects. We invest in decorative lighting downtown, install enough curbing to build our own Washington Monument. We Save the Rain, Save the Swans and even dredge Onondaga Lake while many of our residents are economically crumbling like an old sidewalk.

Just imagine for a moment, if our political leaders placed as much energy in our quality of living as they have on Save The Rain and Curb-apalooza?