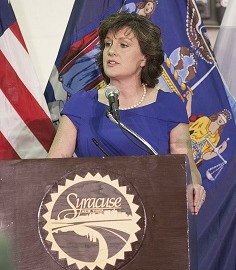 SYRACUSE, N.Y. – Mayor Stephanie A. Miner highlighted findings from the Office of New York State Comptroller Thomas P. DiNapoli that showed for the third straight year that the City is not considered to be fiscally stressed. For 2015, Syracuse received a score of 32.5 percent through State Comptroller DiNapoli’s Fiscal Stress Monitoring System.

“This ‘no stress’ designation demonstrates the commitment my administration has to making tough choices and delivering results for the people of the City of Syracuse. Our efforts have resulted in recognition from all corners. We have been the recipient of good bond ratings from Wall Street and once again the Comptroller’s office has acknowledged our work through the Fiscal Stress Monitoring System,” said Syracuse Mayor Stephanie A. Miner. “There is still much work to do to ensure our finances are sustainable in the long-term. It is critical New York State provide serious mandate relief and offer further assistance to municipalities.” 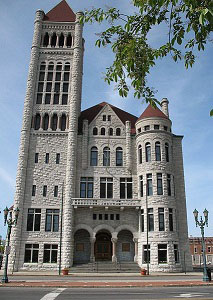 “Mayor Miner continues to face the city’s tough fiscal challenges head-on,” said New York State Comptroller Thomas P. DiNapoli. “She has acknowledged that the financial issues that affect Syracuse are ongoing and will require persistence and careful management. Wisely, the mayor has developed a multi-year financial plan that addresses potential budget gaps and operational deficits. This type of forward-thinking can help a municipality become more efficient, more creative and more effective with the resources that are available. I have no doubt that Mayor Miner and her colleagues can continue to build on their successes.”

Several factors have stabilized the City’s finances including upgrades to bond ratings, diligence to paying off debt and other budget decisions. See Fiscal Stress Charts

The City of Syracuse has seen its bond ratings increase several times during the Miner administration. Currently, all three rating agencies give Syracuse a stable outlook. Moody’s gives the City an A1 rating; S&P and Fitch both give the City A ratings. The bond ratings stem from, in part, the City’s decision not to borrow for operating expenses. S&P complimented the City administration when stated in their 2014 analysis, “the strong management to continue reducing budget gaps and maintaining flexibility.”

Mayor Miner elected not to participate in the New York State Stable Rate Contribution Option, which was proposed and adopted in the enacted state budget in 2013. The City performed a 25-year projection of what costs would have been for pension payments if the City had participated in this program, which could have resulted in as much as $248 million in additional costs to the City at a time where new revenue is largely flat and local governments are handicapped by the New York State 2 percent property tax cap.

State Comptroller Thomas P. DiNapoli has created an early warning monitoring system to identify municipalities and school districts experiencing signs of budgetary strain so that corrective actions can be taken before a full financial crisis develops.

Using data already submitted by more than 3,000 local governments, DiNapoli’s office calculates and publicizes an overall score of fiscal stress for municipalities and school districts across the state. These scores classify whether a community is in “significant fiscal stress,” “moderate fiscal stress,” “susceptible to fiscal stress,” or “no designation.” This system is based on a process that DiNapoli’s auditors have been using to detect financial problems in communities.

Localities currently facing some level of fiscal stress include: