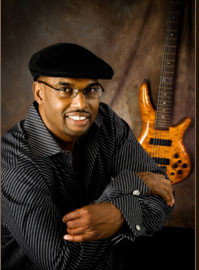 Gerald Veasley’s favorite quote from a musician comes from the late jazzman Grover Washington, Jr. who declared, “Everybody’s got something to say.”

Veasley, a Philadelphia-based bassist, certainly has something to say and has done so on recordings such as Soul Control and Love Letters. On the CD, Your Move, his music speaks of sadness (“Three Tears”), joy (“Slip’n’Slide) and triumph (“So Close to the Sun”).

He also pioneers new ways to play the four-string bass on tunes such as “Hear Now” on Your Move and on his newest disc, Mingus Project, a tribute to the versatile and prolific West Coast bassist Charles Mingus, who died in 1979.

The Jazz & Wine Fest gets underway on at 5 p.m. Friday, July 26, with music by Brownskin at the World Beat Pavilion. The Syracuse-based sextet continues with sets at 7:30 and 9:15 p.m.

Inspired by groups such as Mint Condition, The Roots and Tony! Toni! Toné!, the Brownskin band formed in 2007. To name the group, founder Nate Brown combined his last name with his instrument of choice, the drums, also known as “skins.” Brownskin features Nate on drums, Joe Cummings and Ekwan Brooks on keyboards, John Dale on bass and Danielle Mitchell and Gary Carter on vocals.

Friday’s headliners include Blowin’ in the Wind at 6:30 p.m. followed by Atlas XXXIII at 8 and 10 p.m. One of Syracuse’s most popular dance bands, Atlas is now fronted by vocalist Andre Johnson.

The festival’s Mardi Gras Tent will feature Dixieland music by the Soda Ash Six on Friday evening and R&B by TrumpTight on Saturday night.

After the stages in Clinton Square close down each night at 11 p.m., after-hours jam sessions will draw musicians and fans alike to Jazz Central, at 441. E. Washington St., about a block east of City Hall; 479-JAZZ.

“Our main-stage artists, student musicians and local pros kick out the jams in a free-for-all that always lasts until close to dawn,” said festival director Larry Luttinger.

The festival is part of Syracuse ArtsWeek, a partnership between the jazz and wine event and the Syracuse Arts & Crafts Festival in Columbus Circle.

“There’s a multiplicity of decision-making in the game of chess, and there are consequences to every action,” observes the brilliant bass player Gerald Veasley. “In a lot of ways, making music is like that too. There are so many choices, especially in jazz, where the situation is never the same twice. That’s always exciting to me. You’re creating new scenarios at every turn – every time you step in front of an audience, or every time you step into the studio. That’s what drew me to this kind of music in the first place – the idea that it was always fresh – there was always an opportunity and a new challenge. Unlike chess, though, winning in jazz doesn’t mean someone else has to lose.

“After all the records I’ve made, I’m really mindful of the fact that not just music but life in general is a lot like that too. There are so many decisions that you have to make. You get the best information you can, and then you take the next step. Sometimes you have to be willing to make a leap and take a chance. There are always situations where you have to be flexible and adjust, and you have to adjust quickly.”