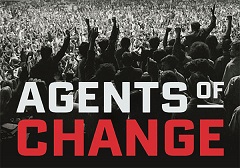 In honor of Black History Month the Office of Program Development and Community Folk Art Center present a Screening of:

From the well-publicized events at San Francisco State in 1968 to the image of black students with guns emerging from the takeover of the student union at Cornell University in April, 1969, the struggle for a more relevant and meaningful education, including demands for black and ethnic studies programs, became a clarion call across the country in the late 1960’s. Through the stories of these young men and women who were at the forefront of these efforts, Agents of Change examines the untold story of the racial conditions on college campuses and in the country that led to these protests. The lm’s characters were caught at the crossroads of the civil rights, black power, and anti-Vietnam war movements at a pivotal time in America’s history. Today, the struggle continues with the protest in and around Ferguson, Missouri and the nationwide student-led movement, including the I, Too, Am (Harvard, UCLA, Michigan, etc) campaigns, which according to the Boston Globe lay bare the “the racial tensions on campuses today, raising questions about inclusiveness, identity and racial stereotyping.” Agents of Change links the past to the present and the present to the past–making it not just a movie but a movement. R.S.V.P. 866.706.1372 or pdevelop@syr.edu