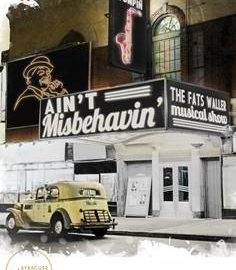 Musical celebrates Fats Waller, who helped define the swinging sound of the Golden Age of the Cotton Club

SYRACUSE, NY – Experience 1940s Harlem in the Tony Award-winning buoyant musical Ain’t Misbehavin’ at Syracuse Stage. Named after the song by legendary composer and pianist Fats Waller, Ain’t Misbehavin’ is a classic revue with vibrant performances and a versatile cast channeling Harlem nightlife in the 1940s. With famous songs such as “Honeysuckle Rose”, “Ain’t Misbehavin’”, “T’ Ain’t Nobody’s Biz-nez If I do”, and a roomful of comic and sassy banter, the show is, in the words of The New York Times, “ … a resurrection of a great black artist’s soul. ”

Ain’t Misbehavin’: The Fats Waller Musical Show is directed and choreographed by Patdro Harris. The musical performs March 1 – 26 in the Archbold Theatre at the Syracuse Stage/SU Drama Complex, 820 East Genesee St. The opening night performance is Friday, March 3 at 8 p.m. 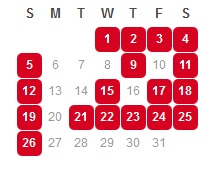 As an artist, Waller was a triple threat: gifted composer, brilliant musician and comedian extraordinaire. “He was the greatest Jazz pianist who ever tried to make people laugh, and the greatest comedian who ever played Jazz,” wrote Murray Horwitz, who along with Richard Maltby, Jr., initially conceived the idea for Ain’t Misbehavin’. So funny was Waller, Horwitz believes, that he belongs in the company of the greats from the Golden Age of Comedy: W.C. Fields, The Marx Brothers and Jack Benny.

Director Harris considers Waller’s music to be an expression of joy. “Joy is something you want to share,” he explained.  “You can’t keep joy to yourself. His music is like that. It is music for participating.”

In this way, Harris believes, listening to Waller’s music is like visiting a good friend.  “His music is the reason we go out on Saturday night. There’s something for everyone. When we listen to his music, we make connections with each other,” he said. “It’s like we can be friends.”

With 29 songs, Ain’t Misbehavin’ captures the spirit and energy of late night rent parties in Harlem and impromptu “cutting” competitions, where the best “stride” pianists tried to outdo each other in showmanship and skill. As a young man, Waller honed his talent at such parties and carried that same sense of improvised fun to his performances and recording sessions.

Five talented singer/actors supported by a six-piece band led by Phillip Hall enliven the on stage proceedings, and, in the words of director Harris, “deliver Waller’s music the way he would have wanted it delivered.”

As a teenager in the late 1960s, Horowitz discovered Waller’s records at a local library. He was instantly smitten by the music and baffled by Waller’s relative obscurity. Ain’t Misbahavin’ was an attempt to reinvigorate interest in the Jazz great. The success of the show was gratifying for Horowitz personally because of the high esteem in which he held Waller.

“Fats Waller was an irresistible force of humanity,” Horowitz wrote.  “He let us know – in ways nobody else had – that we’re all in this thing together. He comprised high living, virtuosity, wit, vulgarity, imagination, spirituality, hedonism, slapstick, elegance, romance, innovation, discipline, recklessness and much, much more in one enormous body over a span of only 39 years. You hear all of that in his music. You see and hear it in his comedy. He is one of the greatest of all American artists.” 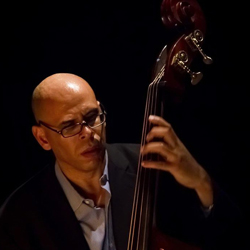 Opening Night Party (free for ticket holders)
Join the cast for a post-show celebration with live music, food, drinks and good times. Featuring the Bill Horrace Band bringing a mix of 1930s Harlem and jazz of their own creation.

March 5          Prologue at 1 p.m. (free for ticket holders)
An intimate, 20-minute pre-show discussion with the actors one hour prior to curtain. Bring your questions.

March 11        Prologue at 2 p.m. (free for ticket holders)
An intimate, 20-minute pre-show discussion with the actors one hour prior to curtain. Bring your questions.

March 15        Wednesday @ 1 Lecture (free for ticket holders)
James Gordon Williams, a composer, improviser, pianist and critical musicologist, will give a lecture at 1 p.m. in the Sutton Pavilion before the 2 p.m. performance. His research focuses on African American musicians who use experimental music practices to articulate their subjectivity while also creating radical music texts to promote social justice.

March 18        Audio Described Performance at 3 p.m. for patrons who are blind or visually impaired.

March 19        Open Captioning at 2 p.m. Performance for patrons who are deaf or hard of hearing.

March 23        Prologue at 6:30 p.m. (free for ticket holders)
An intimate, 20-minute pre-show discussion with the actors one hour prior to curtain. Bring your questions.