Most people don’t know that African-Americans were the first to memorialize the war dead from the Civil War in 1865, it remains a footnote in American history. Pre-dating the “official” 1868 call for the commemoration for the thousands that died. It took almost 100 years before the recognition of Memorial Day as a national holiday.

Barbara Maranzani author of 8 Things You May Not Know About Memorial Day writes; “As the Civil War neared its end, thousands of Union soldiers, held as prisoners of war, were herded into a series of hastily assembled camps in Charleston, South Carolina.

Conditions at one camp, a former racetrack near the city’s Citadel, were so bad that more than 250 prisoners died from disease or exposure, and were buried in a mass grave behind the track’s grandstand. They dug up the bodies and worked for 2 weeks to give them a proper burial as gratitude for fighting for their freedom. 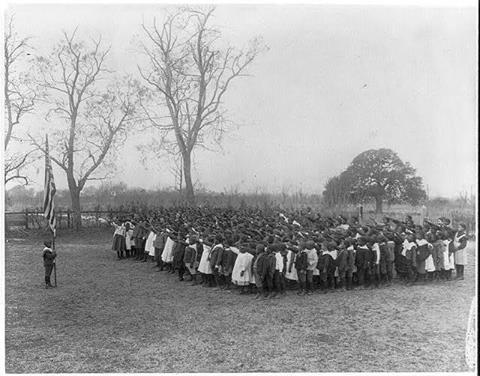 On May 1, 1865, more than 1,000 recently freed slaves, accompanied by regiments of the U.S. Colored Troops, gathered in the camp to consecrate a new, proper burial site for the Union dead. They then held a parade of 10,000 people led by 2,800 Black children where they marched sang and celebrated.

Three weeks after the Confederate surrender, an unusual procession entered the former camp: On May 1, 1865, more than 1,000 recently freed slaves, accompanied by regiments of the U.S. Colored Troops (including the Massachusetts 54th Infantry) and a handful of white Charlestonians, gathered in the camp to consecrate a new, proper burial site for the Union dead.

The group sang hymns, gave readings and distributed flowers around the cemetery, which they dedicated to the “Martyrs of the Race Course.” They then held a parade of 10,000 people led by 2,800 Black children where they marched sang and celebrated.

In May 1868, General John A. Logan, the commander-in-chief of the Union veterans’ group known as the Grand Army of the Republic, issued a decree that May 30 should become a nationwide day of commemoration for the more than 620,000 soldiers killed in the recently ended Civil War. On Decoration Day, as Logan dubbed it, Americans should lay flowers and decorate the graves of the war dead “whose bodies now lie in almost every city, village and hamlet churchyard in the land.

It didn’t become a federal holiday until 1971

American’s embraced the notion of “Decoration Day” immediately. That first year, more than 27 states held some sort of ceremony, with more than 5,000 people in attendance at a ceremony at Arlington National Cemetery. By 1890, every former state of the Union had adopted it as an official holiday. But for more than 50 years, the holiday was used to commemorate those killed just in the Civil War, not in any other American conflict. It wasn’t until America’s entry into World War I that the tradition was expanded to include those killed in all wars, and Memorial Day was not officially recognized nationwide until the 1970s, with America deeply embroiled in the Vietnam War.”

Excerpt from: 8 Things You May Not Know About Memorial Day by Barbara Maranzani