Again, only finalist have been announced the order of first and second place will be announced at The Syracuse Press Club’s 38th annual Scholarship and Professional Recognition Awards Dinner April 30th 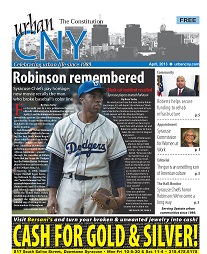 These awards were judged by various news organizations and press clubs from across the country. According to founder and publisher Ken Jackson, “Let me start out by saying ‘Black Writers Matter’, I am pleased that the journalism community has recognized Urban CNY as a voice, one of many coming from a diverse community. The award also shows that you don’t have to be a large publication or a large well-funded digital media corporation to participate. The recognition is an indication that African-American voices do matter in ongoing discussions about politics, civil rights, equality of opportunity and how we live our lives in Syracuse New York.”  Urban CNY aka The Constitution began in 1989 and is celebrating its 27th year of operation.

Ken Jackson is publisher and editor of Urban CNY/urbancny.com and former contributing writer for the Syracuse New Times and Eagle Newspapers. Since 2004, 21 journalism awards have been presented to Jackson and/or Urban CNY