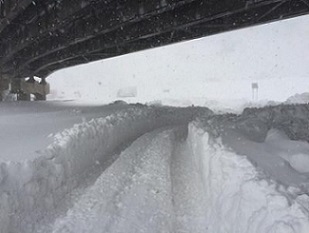 According to reports, NBC’s Al Roker said “our bad”, to viewers on Friday morning after Thursday’s storm was bigger, and more troublesome, than originally predicted.  As with many reports of possible snowfall accumulation, a change in direction or shift in temperature can turn ½ inch of rain into a foot of heavy wet snow. It was no different for this storm which at first forecast a rain event for New York City with snow reaching inland. Traffic was snarled and people angered due to unpredictable variations in weather. The autumn snow storm broke records in 13 states.

In Syracuse NY, the city issued a statement Friday,” The city experienced an exceptional fall snow storm early this morning. It came at a time when our full winter staffing and plow equipment is not yet in place. We apologize to those streets awaiting snow clearance. Our crews are still working tonight”

The area is experiencing lower than normal temperatures, the recent snow storm dumped over a foot of snow in some parts of the area. Syracuse received between 10 inches and 1 foot depending on where you measure.

This snow event come as the city has begun the process for clearing major walkways during these events. Packages were put out to bid. Soon the city of Syracuse will have its first municipal sidewalk snow removal program.