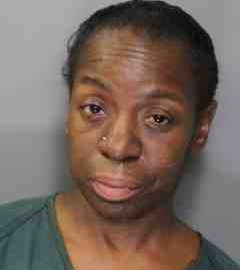 Syracuse, NY.  On Tuesday, January 01, 2019, at approximately 12:57am, Syracuse Police Officers responded to the VA Hospital, 800 Irving Ave, in regards to stabbing investigation.  Upon arrival, officers spoke with the 61 year old male victim.  The victim told police he had been involved in an altercation with his wife, Zanette Knighton, 46, of Syracuse.  The victim said Knighton began swinging a knife at him and cut him.  The victim sustained a laceration to his bicep and his hand.  The victim’s injuries are not considered life threatening.

Police Officer Christopher Buske located Knighton at her residence in the 300 block of Bruce Street.  She was taken into custody without incident.  Knighton was arrested and charged with Assault in the Second Degree and Criminal Possession of a Weapon in the Third Degree.  She was lodged at the Onondaga County Justice Center pending her arraignment.