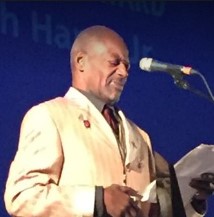 On Tuesday, April 7th, 2020, at around 9:40 P.M., Officers responded to the intersection of S. Salina St. and Brighton Ave. for a hit and run with injuries complaint. Upon arrival, Officers discovered an adult male who had recently been struck by two vehicles.

The investigation shows that the victim was riding his bicycle in the area of S. Salina St. and Brighton Ave. when he was struck by the first vehicle. The first vehicle then fled the scene after the collision. While on the ground, a second vehicle struck the victim soon after the first.  The victim was transported to Upstate Hospital with critical injuries.

The victim is identified as Elijah Harris, 62, and was later pronounced dead at the hospital. An investigation into the collision was led by the department’s Traffic Section. After examining physical evidence, canvassing witnesses and interviews, suspect information was developed for the driver of the first vehicle.

As a result, an arrest has been made. Jerrell A. Brown, 32 of Syracuse, was charged with Leaving the scene of a fatal motor vehicle collision, aggravated unlicensed operation in the third degree and unlicensed operation. Brown was lodged at the Onondaga County Justice Center.

The investigation also determined that the second collision was unintentional and no charges have been filed at this time for the other driver involved.​