ArtRage is committed to breaking down the art world’s boundaries about who is welcome. They believe that everyone has the right to art and that art is essential to building an open, just world. Their vision for change is one that creates a community of open-minded, tolerant individuals with an appreciation for the inclusion of art in everyday life. ArtRage Gallery offers the community an experience that encourages the breakdown of boundaries so that people can see themselves in the work and then in one another. ArtRage is no ordinary gallery, exhibit art that cultivates critical thinking skills; leading to question the power structures that exist in our society and to imagine other ways of life.

That, they believe, is the seed of a movement for cultural and social change. 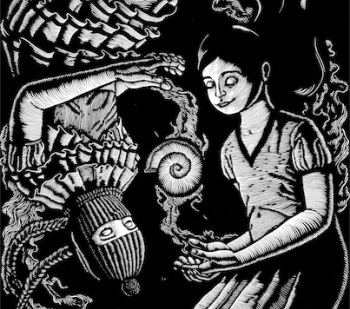 Image by Mazatl. He is an activist and artist who lives in Mexico where he partakes in several collectives seeking social/political/environmental justice.

Fifteen artists of diverse immigrant backgrounds were invited to create large-scale woodcuts depicting images and messages inspired by their experiences as documented or undocumented citizens. The themes explore deportation, justice, worker’s rights, the immigrant’s contributions to society and the freedom to move across borders. Artists worked for months carving their imagery into large wood panels, utilizing a printmaking process (some working in the medium for the very first time) that has a long history for disseminating information and rallying change.

Professor Holly Greenberg and students from the Syracuse University printmaking program traveled to San Francisco in 2014 and set up a pop-up printmaking studio on the streets of the Mission District. Working side by side, the students and artists printed the large-scale (7’x3′) woodcuts on fabric with a two-ton steamroller. The resulting impressions are intended to be used as banners in political marches and protests across the United States where immigration policy change is currently challenged. Carving Through Borders illustrates various aspects of migration—detention, deportation, displacement, discrimination—and also communities’ resistance and resilience.

SEEN AND HEARD: Embracing Our Past, Empowering Our Future
September 9 thru October 21, 2017

SEEN AND HEARD: Embracing Our Past, Empowering Our Future

This fall marks the 100th anniversary of New York State signing women’s suffrage into law. As we mark the historic milestone of our ancestors’ activism we recognize that the struggle for gender equality is far from over; and today’s women know it. In January 2017 we saw the largest protest in US history: the Women’s March on Washington with sister marches all over the country. In collaboration with the Everson Museum’s exhibition of the same title, ArtRage will feature the work of CNY women artists who use their art to speak out about issues still facing women in 2017. Exhibiting Artists: Suzanne Gaffney Beason, Lisa Brasier, Christine Chin, Anne Cofer, Mary Giehl, Denise Harrington, Gail Hoffman, Joyce Day Homan, Vanessa Johnson, Laurie Oot Leonard, Judy Lieblein, Emily Luther, Lorena Molina, Candace Rhea, Sharon Bottle Souva, Cherie Spara and Mary Stanley. 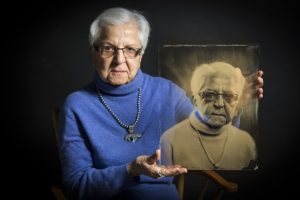 STILL THE ONE: Douglas Lloyd

For this exhibition, ArtRage sought out local elder women activists; all are 80 years or older. Still the One addresses urgent questions: what exactly is “activism” and where do we find it? What and who have we lost sight of? What endures? What will get us safely home again? We are seeking the wisdom of these elders in a troubled and urgent moment, going back to the source or back to the well; seeking to recognize those who persisted and endured and made a difference.

A photographer for 25 years, Douglas Lloyd has focused on wet plate processing since 2014. Wet plate collodion photography was invented in 1851 and widely revived in recent years for the detail and loveliness of its images. Still the One finds a perfect fit between method and subject; one which values age and history.

WE ALL FALL DOWN: The Art of Donalee Peden Wesley
February 3 thru March 24, 2018 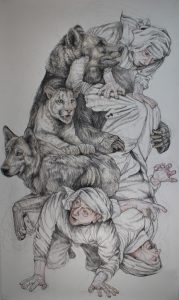 The mixed-media drawings in this exhibition focus on the human/animal relationship. They are a testament to the plight of animals when forced to interact with humans. Encroachment, factory farming, medical research, military experiments, fur industry, trophy hunters, puppy mills and extinction are a few of the topics addressed. Penden Wesley chooses not to show the horrific or to shock, but to address the issues and invite the viewer to reflect, discuss, question and in turn help to resolve problems. 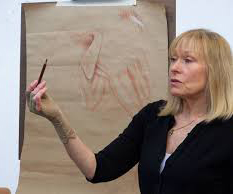 Donalee Peden Wesley, received her BFA and MFA from Syracuse University on a full Jacob Javitts Fellowship. She has taught for over 15 years at numerous universities and colleges among them SUNY Oswego, University of Wisconsin Madison, Cazenovia College and Hamilton College. She currently teaches at Syracuse University and Onondaga Community College. Donalee’s work has been published in multiple books and magazines. She has received numerous awards and fellowships among them The National Endowment for The Arts and The New York Foundation for the Arts. Her work is included in many public collections including: The Everson Museum; Munson William Proctor;SUNY at Brockport, Liberal Arts Building and the Drawing Institute to name a few, as well as extensive private collections worldwide.

WITHIN OUR GATES: Site and Memory in the American Landscape
Paintings by Keith Morris Washington • April 7 thru May 19, 2018

The practice of human sacrifice, known as lynching, has been carried out openly, as a public social ritual, in the United States from the very founding of the Republic. Within Our Gates: Site and Memory in the American Landscape is designed to inform a broad audience about this phenomenon of lynching as human sacrifice within the context of the “landscape”. The term lynching faded from popular usage with the advent of the 1960’s civil rights movement. However, death by lynching is still exercised today as evidenced by the murders of James Byrd, Jr., Matthew Shepherd, Billy Jack Gaither, and Raynard Johnson. Only the taboo nature of this ritual has changed. – excerpted from Keith Morris Washington’s artist statement. 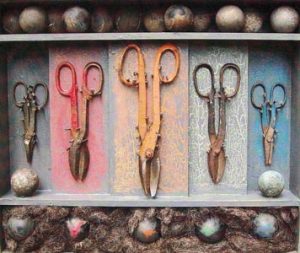 This collection of assemblages by Cazenovia, New York artist Jim Ridlon represents visual puns reflecting on the inadequacies and inconsistencies of our political systems. The work focuses on points of contention that establish party lines and inhibit the political process. Found objects are used as metaphors that comment on political strategies resulting in positions of power and dominance.

Jim Ridlon is an artist and a former American football safety who played college football for Syracuse University and eight seasons in the National Football League for the San Francisco 49ers and the Dallas Cowboys. After his football career, he became a sports painter and sculptor, returning to Syracuse University to teach art classes and double as a backfield coach for the football team in 1965. He also wrote a novel and worked as a color commentator on the Syracuse University football radio broadcasts for over 20 years. In 1988, he was commissioned to design and sculpt the Outland Trophy, which has become one of college football’s most prestigious awards.