Community Leaders Call on Congress to Pass the Voting Rights Advancement Act Syracuse, New York – On August 6th, a​ctivists and community leaders held a vigil ​at the Federal Office Building t​o mark the 54th anniversary of the signing of the 1965 Voting Rights Act (VRA) and urged Congress to restore access to the ballot. The action is one of over 40 events held throughout the country.

The Voting Rights Act improved voting rights and voter turnout for black, brown, Native American and Asian Americans, but the U.S. Supreme Court gutted the law in its 2013 ​Shelby County v. Holder decision. Since the Shelby decision, 20 states have implemented restrictive voting laws, including partisan gerrymandering, voter purges, and voter ID laws. Earlier this year, the Supreme Court ruled that partisan gerrymandering is legal in the United States, which activists say increases the urgency to restore the critical voting rights protections in the Voting Rights Act. 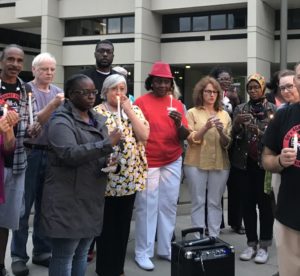 One of the cases that the Supreme Court was examining was the North Carolina case in which a North Carolina court found that the state legislature drew district lines “with surgical precision based on race.”

“State legislatures across this country are drawing district lines to benefit their party at the detriment to our democracy. When representatives choose their voters to the extent where their seat is so safe it is no longer competitive, they stop being responsive to voters.” said Christine Wood, Organizer for Public Citizen Earlier this year, Congress introduced the Voting Rights Advancement Act (VRAA) ​(HR ),​ which would restore the nation’s ability to prevent racial, age and ability discrimination in voting. As part of tonight’s vigils, people throughout the country will light candles and demand Congress pass the VRAA. As is stands, the bill 223 co-sponsors. Representative John Katko has yet to sign on as a co-sponsor.

“I call upon Congress to pass the Voting Rights Advancement Act. We have had enough with voting laws that suppress the voices of the black and brown community. If we have to march, we will march. If we have to call, we will call. Whatever we have to do to protect our right to vote.” said Vernon Williams.