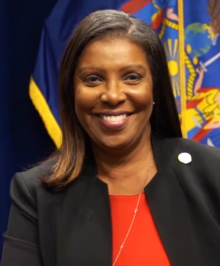 New York – New York Attorney General Letitia James today applauded the signing of a new law that will ensure funds received by the state as the result of a settlement or a victory in litigation against opioid manufacturers, distributors, dispensers, consultants, chain pharmacies, or other entities responsible for the opioid crisis will be deposited into an opioid settlement fund that will support treatment, recovery, and abatement efforts. Attorney General James worked with the bill’s sponsors — State Senator Gustavo Rivera and State Assemblymember Carrie Woerner — to create the legislation, which was signed into law today. Governor Andrew Cuomo signed the legislation into law after both chambers of the New York state Legislature passed their respective versions of the bill — S.7194 and A.6395B — unanimously earlier this month.

“Ensuring funds recovered from opioid settlements and litigation go where they’re needed — to fund prevention, education, and treatment programs — is a massive step in our efforts to end the opioid epidemic and provide justice to its victims,” said Attorney General James. “While no amount of money will ever compensate for the thousands who lost their lives or became addicted to opioids across our state, or provide solace to the countless families torn apart by this crisis, this law ensures funds are used to prevent any future devastation. I thank Governor Cuomo, Senator Rivera, and Assemblymember Woerner, as well as the county and local governments, advocates, service providers, and families for working with our office over the last six months to get this law passed.”

As a result of the passage of today’s law, hundreds of millions of dollars from ongoing litigation and possible settlements Attorney General James is working on through lawsuits against the various manufacturers and distributors responsible for the opioid epidemic would go to communities devastated by the opioid epidemic.

The cases against Purdue Pharma, Mallinckrodt, and Rochester Drug Cooperative are all now in U.S. Bankruptcy Court. Johnson & Johnson (J&J) settled their part of the lawsuit this past weekend. The trial against all other defendants is currently underway.

As part of Attorney General James’ agreement with J&J — which will deliver up to $230 million to New York state — the company will now pay more in scheduled payments to New York in the first year because the legislation was signed into law.