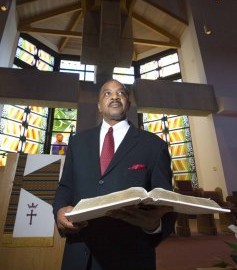 Nestled on solid rock above the city of Syracuse’s eastside, Bethany Baptist Church has provided a place of worship for its primarily African American congregation at various locations since 1887. In the beginning Union Baptist Society was formed by a delegation from the local African Methodist Episcopal church, it became People’s A. M. E. Zion. Union Baptist Society would later become Bethany Baptist Church.

Rev. Leo Murphy served 30 years, Rev. Raspberry 20 years and Rev. Dewberry reigned over the congregation for 12 years until his controversial removal which had church members seek legal remedies to a situation that drew the attention of the entire urban church community. That was a long time ago and, after a host of guests, Bethany Baptist has selected its new minister, Phil Turner. Rev. Turner served as Bethany Baptist Church’s Interim Minister for the last 3½ years. Turner was approved by church leadership in January; however, the installation ceremony was held in April.

“Were doing what we can to be an asset to the community.” Turner explains as he runs through a list of goals set by Bethany’s congregation. “The church is open to the community we want our presence to be felt in the community, that was Christ’s intention from the very beginning.” Fellowship Hall has been completed with a commercial grade kitchen, instruction and multipurpose rooms the facility equips the church with space for Funeral Repast and community meetings.

The newly opened facility has been put to use for community based activities including candidates Forums sponsored by Bethany and the Syracuse/Onondaga NAACP. In 2006 Mayor Matt Driscoll delivered his State of the City Address at Bethany.

Bethany has a rich oral history that includes member accounts of Harriet Tubman visiting the church with local friend. Their history further explains how Harriet Tubman was baptized in the church. “At some point we’d like to honor her legacy perhaps by naming the road leading towards through church property from Beattie Street towards Seeley Road.”

Turner an accomplished musician and former radio executive has a different take on music that has many shaking their heads. “Some of the gospel songs of yesterday were considered to be revolutionary at the time are now considered standards, songs like ‘Oh Happy Day,’ ‘I’ll Take You There’ and ‘Respect Yourself’ that were played on both secular radio and the gospel format is now considered traditional music.”

“Things change whether we change with them or not is another story. The key is not to try to change young people but reach them where they are, they like the music. If that’s what they like that’s what they like, if they don’t want their grandfather’s music they don’t want it. There’s nothing we can do to make them like it. If the devil talks to them in that kind of music then why not have Christ talk to them in that music. They couldn’t change our generation. People forget we were outrageous. We wore bell bottom pants, shirts with collars ‘out ta there’ and six inch platform shoes.”

Turner continues, “All those folks, the way that we were, the renegade approaches, our hippy attitudes, eventually everybody got a haircuts got a job and became taxpayers and mortgage payers with bills and car notes.

What seemed wild at one time…those same people we’re looking at now who appear to be just completely off the wall are gonna settle down one day get jobs and pay their bills they’re gonna have to do that or they have to die. It’s just a phase and everybody gets serious after a while. Some of the renegades have served as presidents.”