Movie will pass the 1 billion mark this weekend

We live in an era when political rhetoric from the President of the United States condemns an entire continent. President Trump’s quoted while discussing Africa and Haiti as saying, ““Why do we want these people from all these s**thole countries here?  We should have more people from places like Norway.” There’s no better setup for the release of a movie like Black Panther. 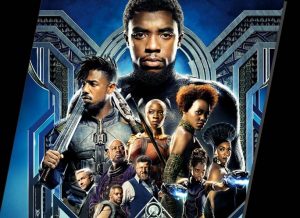 According to Variety, “Disney-Marvel’s Black Panther is continuing its super-heroic run, grossing a stunning $501.1 million in North America in only 17 days and becoming the 10th highest grosser of all time.” Black Panther has hit $897,705,037 globally since its release in mid-February.

When the dust settles on this instant classic, Black Panther will become the highest grossing movie of all time. The film excels at all levels, as some dissect every line for meaning and context. Super-hero special effects, script and characters define and propel the movie. Perhaps the production is summed up by one critic describing Black Panther as, “Brimming with cultural resonance”.

For those who’ve not seen the movie I’ll not spoil it. Black Panther is the story of King T’Challa, as he returns home to the African nation of Wakanda to serve as his country’s new leader.

Rather than hit you over the head, Black Panther’s subtext and style are groundbreaking in telling the story. Race matters in Black Panther, as an exploration of the past while embracing Afrofuturism. For those of us growing up during the 1960’s, we grew up looking at the futuristic space world thinking, “where are all the Black people?” 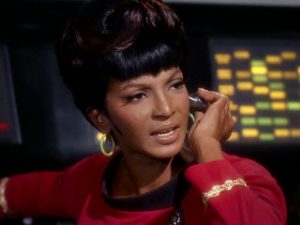 Nichelle Nichols who played Lieutenant Uhura  on Star Trek, was thinking about leaving the USS Enterprise, but Martin Luther King Jr.  managed to change her mind. He knew the importance of having Black people in Outer Space, even if it were only on television.

As Star Wars defined a generation of moviegoers, raising the bar for all films coming after its release. Black Panther represents a defining a moment for today’s movie goer.  The only popular cultural phenomenon reaching this level of chatter within the African-American community, was the week long broadcast of the original Roots on ABC. Discussions and debates over the meaning of so many things from the movie are endless. It’s provocative, sending you to places where perhaps, we’ve never been.

Africans are not depicted as the downtrodden, the helpless and the weak; Black Panther is a movie giving Black children a sorely needed super hero. Providing a platform for discussion of what unites us, while being a caustic reminder that we’re not united.  Black Panther gives context to the complexities of race and power within our own back yards.  And no one can deny the affirmation of the strength and power of the Black woman that is woven through every scene of this movie. In one of its comical moments, how many sista’s have just wanted to toss that wig, and take care of business?

Box office receipts defy previous, “conventional wisdom” that a movie with a predominantly Black cast could bring home financial gold for Disney, the Mouse House.  Disney knows its future depends on delivering to a rapidly changing demographic of America and the planet. I’m sure their designers are feverishly working on plans to add Wakanda to their theme parks. It’s a small world after all.