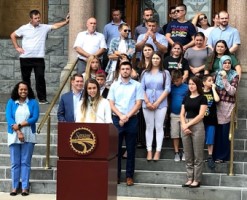 The #Bosnian community here in Syracuse celebrated the republic’s vote for independence from Yugoslavia in 1992 with a proclamation and flag raising ceremony On Friday July 26, 2019.

A result of their vote to declare independence led to a war that took almost 200,000 lives, and more than 1 million people all over the world being displaced, including more than 3,000 right here in Syracuse. The community’s contributions to Syracuse’s cultural diversity, in addition to their traditions, workforce, organizations and businesses are examples of what helps to make this city great. We celebrate in honor of Bosnian Community Recognition Day. 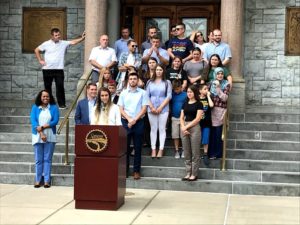 #Liberia, the oldest African republic, celebrates 172 years of independence today. The Republic of Liberia, a former colony of the American Colonization Society, became the first democratic republic in African history after its liberation. Mayor Walsh and Deputy Mayor Owens presented a proclamation to the Liberian Community of Syracuse during a flag raising ceremony, declaring today Liberian Community Day in the City of Syracuse.