Calls to Police involving guns, stabbings and shots fired have become a common scenario, in Syracuse this summer, within a one-hour period on July 26th , between 11:08 pm and 12:09 am violence calls spiked, as there were 3 responses by police, 1 death and 1 in critical condition. Earlier in the evening 9:00 PM, another incident occurred on the 100 block of Martin Luther King W., a location where casings were found, later a 30-year-old victim arrived at Upstate Hospital. Since New York State reopened there has been what appears to be a rash of violence within the city of Syracuse. Stabbings, shootings and shots fired are occurring again, after a respite, at times in rapid succession.

Violence up in Major Cities Across the Country

Violence has been occurring at an alarming rate in cities throughout the country. According to a July 6th story in the Washington Post, Major U.S. cities, gripped with crisis, now face spike in deadly shootings, including of children “Tragedies struck in urban centers thousands of miles apart, with 65 people shot over the weekend in New York and 87 in Chicago, and homicides climbing from Miami to Milwaukee.” An 8-year-old child killed over a holiday weekend when a bullet hit her mother’s car, as people were celebrating on July 4th ; an 11 year-old shot at an anti-violence cookout in Washington D.C. In Chicago, it was a 7-year-old girl outside of her home, shot and killed.

Not to be left out, Syracuse, NY had a mass shooting at a party on the Near Westside where 9 were shot, resulting in 1 death and multiple arrests. And since June 20th there have been stabbings, shootings and shots fired on a regular basis. In Syracuse, it’s beginning to appear as though a day without violence, is like a day without sunshine, these are clouds that routinely cast a pall over our land.

Are We Going Through a Crime Wave? 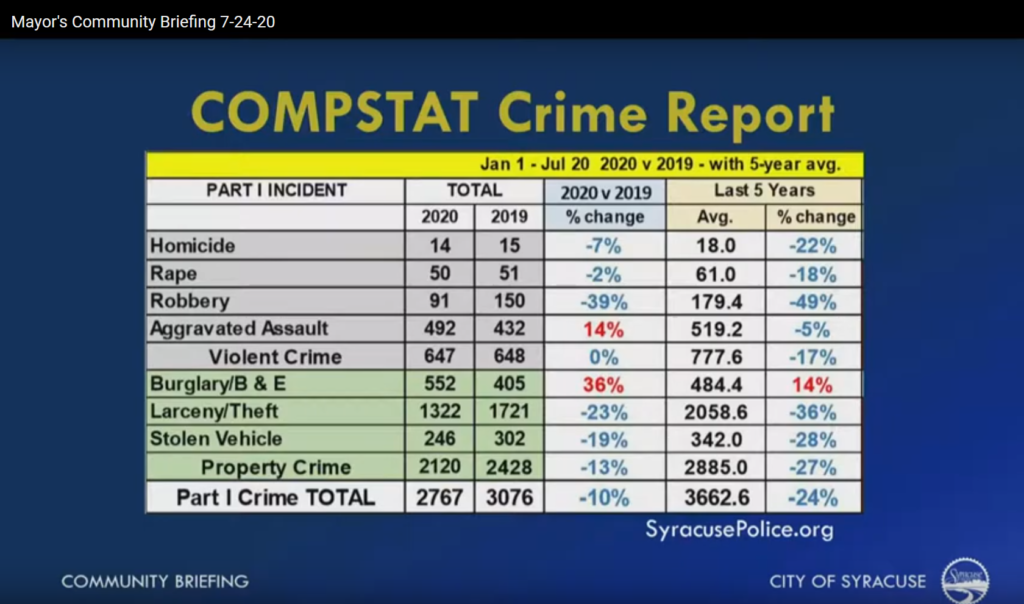 Given that perception being everything at times, Syracuse would appear to be going through a crime wave. However, the numbers tell a different story.

Syracuse city officials are aware of the perception as they told the public in their weekly address. Mayor Ben Walsh admits we’re challenged on both violent and property crime, according to Walsh, “for violent crime, it’s aggravated assaults those are the ones that get the headlines which understandably make people feel less safe, there’s a perception that crime is going up when overall it is going down.  So, we’re going to keep continue to keep an eye on that, especially the aggravated assaults.  On the property crime side, burglaries a big problem, 36% increase in burglaries. We want to be upfront and focused on those numbers that are high; but we also, tell the full story, the overall figures are down.” The Mayor had charts and graphs to back his claims of an overall reduction in crime.

Even with statistical information (receipts) verifying a reduction in overall crime, it doesn’t stop the anguish felt by those residing within these neighborhoods. Clifford Ryan and OG’s Against Violence has been on the front lines “in the streets” as documented in many cases, preventing violence by direct engagement.

Syracuse Common Council President Helen Hudson said, “We have a problem in the community with mental health, there are many out there who are not being treated that require attention. On top of everything else we’re dealing with.” 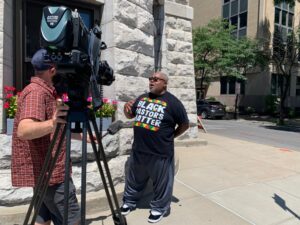 The group met Friday on the steps of Syracuse City Hall, Eure says “we are going into the community with events, such as food drives”. It was clear from his statement, there are ongoing efforts by clergy to reach a population challenged by both COVID-19 and cascading reports of inner-city violence.

The following are just a sample of what has occurred in Syracuse over a 3-hour period. This cycle is beginning to repeat itself, as multiple crimes are occurring within short periods of time.

What Happened Over the Weekend?

The following reports are generated by the Syracuse Police Department, this is an example of a given period in the day of the Syracuse Police Department. This is not isolated as there are days where the department is moving in several directions at once, responding to incidents that happen to occur at times within minutes of each other. The following represents the 3-hour period between Sunday 9 PM through 12:09 AM Monday morning.

On Sunday, July 26th, 2020, at around 9:00 P.M., Officers responded to the 100 block of Martin Luther King W. for a shooting with injuries type call. Upon arrival, Officers discovered evidence of shots fired, and several casings were located. A short time later, a 30-year-old male victim arrived at Upstate Hospital with a gunshot wound to the midsection. The victim is expected to survive. Anyone with information is asked to call the Syracuse Police Department at (315) 442-5222 or by using our Syracuse PD tips app.

​On Sunday, July 26th, 2020, at around 11:08 P.M., Officers responded to the 700 block of Oswego St. for a shooting with injuries type call. Upon arrival, Officers discovered evidence of shots fired, and several casings were located. Officers also found a 27-year-old male victim, who was shot in the head. The male was transported to Upstate Hospital in critical condition.  Anyone with information is asked to call the Syracuse Police Department at (315) 442-5222 or by using our Syracuse PD tips app.

​On Sunday, July 26th, 2020, at around 11:47 P.M., Officers responded to Upstate Hospital for a shooting with injuries investigation call. A male victim, 42-years-old, was dropped off at the hospital by private vehicle with a gunshot wound to the midsection. The male was later pronounced dead. Limited information on the incident location at this time.  Anyone with information is asked to call the Syracuse Police Department at (315) 442-5222 or by using our Syracuse PD tips app.

On Monday, July 27th, 2020, at around 12:09 A.M., Officers responded to the 100 block of Berger Ave. for a shots fired type call. Upon arrival, Officers located evidence of a shots fired, and a residence was struck. There were no injuries reported. Anyone with information is asked to call the Syracuse Police Department at (315) 442-5222 or by using our Syracuse PD tips app.

Local leaders are flummoxed; there are no easy solutions to gun violence. Perhaps a glimmer of hope comes from the movement to Defund the Police, which is really about allocation of resources where they are needed. Defund the Police is simply saying, place money in areas to prevent crime which is a socio-economic issue properly fund those programs that prevent violence. Period.

There will always be a police Department, however how they operate moving forward is coming under increased scrutiny. Look for sweeping changes, as state and local law enforcement seek to contain the onslaught of public concern dealing with citizen police relations. Based on the public outcry, legislative measures will be introduced at the local, State and Federal levels in an attempt to address Community-Police Relations. Perhaps they can solve this bewildering question; specifically, why so many African -American men end up dead, after encounters with Police?