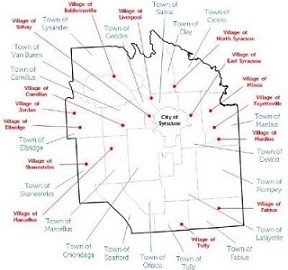 The Proposition: “This House Would Establish a Metropolitan Form of Government for Onondaga County”

The principal recommendation of the Final Report of the Consensus Commission on Local Government Modernization is to establish a new municipal form of government for Onondaga County, with a single executive and a 33-seat legislature. While public forums and town hall meetings have been held to discuss the report, and the proposal has been both criticized and defended in the media, missing is a direct exchange between opposing views, with opportunities for challenge and rebuttal. Moderated by Campbell Institute Director and WRVO Campbell Conversations Host Grant Reeher, this debate will provide that exchange.

Arguing in favor of the proposition are two members of the Consensus Commission:

Arguing against the proposition:

The debate will provide a lively direct exchange among the speakers, as well as opportunities for audience questions. The audience will vote on the issue both before and after the event.

Members of the Central New York community are encouraged to attend the debate as well as the public reception following the debate. Both events are free and open to the public. For RSVP and parking information, please visit https://www.maxwell.syr.edu/Campbell-Consensus-Debate/.

This Campbell Debate is part of an ongoing series sponsored by the Campbell Public Affairs Institute of the Maxwell School of Citizenship and Public Affairs at Syracuse University.