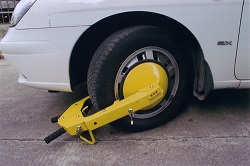 Recently it was reported that people using the Papa Johns’ parking lot on the corner of Dell and Westcott St. are having their cars, “booted” (a device that immobilizes the vehicle) by the property owners.  The cost of parking in the lot and not going to Papa Johns is a $150 boot attached to your car. With there being no laws on the books making this practice illegal, at the urging of the mayor the Common Council introduced legislation making the practice of booting cars on private property illegal.

Almost immediately newly minted Common Councilor Stephen Thompson was concerned about the rights of property owners. Before you start hollering about owner’s rights, let’s examine the redevelopment of Westcott St.

After the sudden closing of the beloved, Westcott Big M resident members of several area organizations started to actively ask, “What next?”

Next came mobilizing to come up with a neighborhood action plan designed to focus on not just retaining what was on the street, but creating diversity of businesses. Planners and architects were solicited to come up with a comprehensive plan that linked the area; a plan that retained its character, without creating a district dominated by beer, pizza and wings.

After losing the Hardware store, large supermarket and other longtime businesses new entrepreneurs were coming in. The neighborhood groups wanted them to use the recently developed Master Plan as a guide to their façade work, which would be coupled with special lighting, a redesign of sidewalks, trash cans, bike racks and other immunities you’d find in a walking neighborhood center.

Volunteers made up of local area residents of the “Westcott Nation”, (as it is affectionately called) took control of the planning process. The success you see now on Westcott Street was 20 years in the making.

Public and private dollars were invested to create the success Westcott Street is enjoying today. Alto Cinco doubled in size, Munjhed’s reinvention across the street, a diner style café and other businesses have been drawn to the area.

No one has benefited more due to the re-energized neighborhood than University Hill Realty and other developers. Between high rental costs to now “booting” cars in their lots it’s a tad bit ungrateful.  Not that parking should be free, but the investments made by government and private entrepreneurs have made Westcott Street the commercial draw it is today. There are times when you can’t find street parking.

Without efforts of the neighborhood, Westcott Street would have become another decaying urban center dominated by cell phone outlets, corner stores and all the beer and pizza you can imagine.

While the property owner has the right to maintain the lot as they see fit. The Common Council is within their jurisdiction to relegate booting of cars to law enforcement only.

In fairness to the lots owner, why not designate several spots for Papa John’s, additional parking spaces could be subsidized by the Syracuse University endowed fund that fuels some of the neighborhood groups. Have a system of parking validation for Westcott Street area businesses; in turn the lot owner receives income from the parking lot. 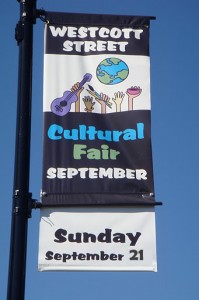 Booting cars sends a message to those thinking of going out for an evening or lunch on Westcott Street. The conversation would go like this, “How about going Westcott Street?” response, “No, Let’s go somewhere else; I hear it’s a mess to park up there, and you can get your car booted.”

Without the efforts of the Westcott Nation area neighborhood groups, there would be no renaissance, no increasing business, and no critical mass to attract a Papa John’s franchise. The renovated houses that once were homes to families have been replaced by people willing to pay much more to be near Westcott Street.

This “renaissance” didn’t happen by itself, there were public investments, the new sidewalks, streets, special lighting, thematic trash cans, and much more. These investments made University Hill Realty’s commercial and residential property even more valuable.

It adds insult to injury when some of those upset with people parking on their lots weren’t shy about accessing Onondaga County’s, “Save the Rain” project. These rain diversion efforts are paid for by the property owner with the assistance of Onondaga County public money.

By booting cars you may achieve your goal of securing your parking lot exclusively for Papa John’s customers. But money is a coward, place too many barriers and those people flocking to Westcott Street will go to other places to dine and shop.