The center of the terminal will be closed off to passengers for the remainder of the project to accommodate major improvements to the entire front lobby. Passengers will need to enter the terminal through the far north and south entrances. Once inside, depending on whether there is a need to check baggage or obtain a boarding pass, they will be directed to either the first level or the second level pre-security corridor to proceed to the security checkpoint.

As a part of the center closure, many tenants have relocated during construction.

A landmark $45 million renovation and upgrade to the passenger terminal building is underway at SYR! 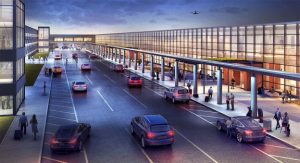 Major improvements include a streamlined layout and new interior and exterior materials and furnishings to give passengers a more modern, functional, and welcoming space. Built in the 1960s, SYR’s terminal still features many of the original materials and layouts from more than 50 years ago. Significant enhancements will deliver an improved passenger experience, simplifying movement in and around the airport. Working on an accelerated timeline, this multi-phase, large-scale project will be completed in October 2018—with passenger access and airline operations maintained without interruption. 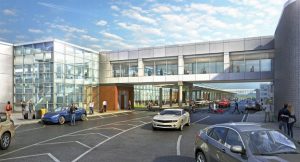 The first improvement that the traveling public will see is a new exterior façade and canopy that boldly brand the airport and bring natural daylight into the entire front of the terminal interior and exterior drop off area. Clad in perforated weathering steel panels, the front entry also includes large,  energy-efficient windows.

Inside, the entire front lobby will be updated with new modern finishes, including walls covered in stone quarried from Central New York. In the main terminal lobby, free-standing kiosks for rental car, ground transportation, taxi, and general information will make

amenities easily accessible. New, larger flight information display units will help passengers find flight information. The original mid-century modern sawtooth ceilings are accented by new, bold sculptural art lighting that emphasizes this signature feature that can be seen from both inside and outside. Green roofs covering the entry vestibules into the lobby and energy-efficient lighting throughout the building further the airport’s commitment to sustainability. 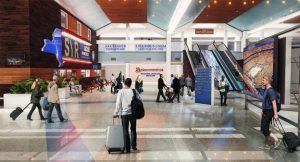 A new Regional Aviation History Museum on the first floor will feature local aviation milestones and important contributions and will display some of the existing large aviation equipment currently in the terminal central lobby.