One of Over 600 Actions Across the Nation

Syracuse, NY — On Saturday, October 2nd, at 11 am a diverse cross section of Central New Yorkers will take to the streets in a march to demand an end to the dangerous, escalating attacks on reproductive rights and freedoms in this country. A brief kickoff rally at Planned Parenthood, 1120 E. Genesee St., will include remarks from New York State Assemblywoman Pam Hunter. Marchers will head down East Genesee St., reaching the Federal Building for a rally at 12 noon.

The action in Syracuse is being organized by the Syracuse Women’s March in collaboration with Planned Parenthood of Western and Central New York as part of the national day of action which will feature over 600 events in all 50 states.

The Syracuse Women’s March describes their motivation for organizing the march: “We’re doing this for our daughters, for ourselves, to protect the reproductive rights, including safe, legal access to abortion, for all humans. We will not go back to being barefoot and pregnant.” 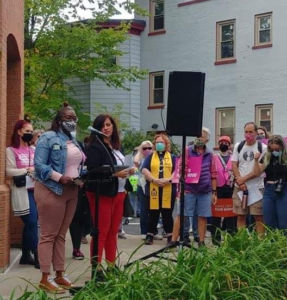 Nodesia Hernandez, Syracuse Women’s March organizer, adds “As African American women we have always been compromised due to multiple experiences of racism, including discriminatory healthcare practices from slavery through the post-Civil Rights era. In a country where I still often do not feel free I need to at least have control over my body, my reproductive rights. For more than 400 years my ancestor’s babies were snatched from their uterus and from their arms. Reproductive Rights are Human Rights. Mental Health Care and Healthcare Rights for all. ”

The actions in Syracuse come as the Supreme Court is set to begin oral arguments on October 4 in a case that could determine the future of abortion rights for all people in our country. The rally at the federal building will feature a diverse range of Central New Yorkers sharing their message through speeches, spoken word and music.

“Pregnant people have the constitutional right to receive abortion care,” notes Hillary Warner, Manager of Outreach and Education Programs at Planned Parenthood of Central and Western New York. “However, Texas’ new abortion ban makes it virtually impossible for pregnant people to access safe, legal abortions in its state. We are gathering today in solidarity, to show our support to those whose rights, health and wellbeing are being compromised by this unjust ban.”

Syracuse Women’s March organizer Nada Odeh noted, “Women fought for decades to get their rights to vote, to work and feel equal in the society, the right to control their own body. There are many situations in which women have needed abortions either for health or other reasons. Being a Middle Eastern woman, I believe that equality and freedom starts with the right to control my own body and have my own voice strong and being heard.”

To promote safety given the ongoing COVID-19 pandemic, the action will all take place outdoors and attendees are asked to wear masks.