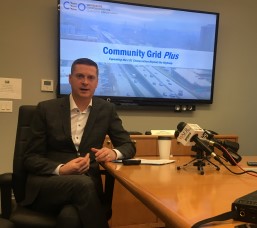 “We are incredibly pleased that the New York State DoT has released the formal Draft Environmental Impact Statement and has selected the Community Grid as the preferred alternative. For the first time since 2008, we do not have to speculate on the future of Interstate 81 in our City and region. Instead, we can turn our full attention to outlining strategies that will maximize the economic potential of this once-in-a-generation, billion plus dollar investment.

As we have stated before, we believe that the Community Grid represents the best foundation on which to build our future. It represents an opportunity to jointly develop and implement a new model for civic collaboration, citizen engagement and re-development that places the needs of our institutions, our businesses, our developers, elected leaders and residents at a shared table with a shared goal of shared prosperity.

However, we also acknowledge that there will be stakeholders that are negatively impact by this decision, which is why we are also committing to County Executive Ryan McMahon, Mayor Ben Walsh, Senator Kirstin Gillibrand, Senator Charles Schumer, Congressman John Katko, and our entire State Delegation, that CenterState CEO will be a partner in designing, innovating and advocating for meaningful mitigation measures that our region deserves so that the legacy of this project can be one that our region can look back on with pride.”