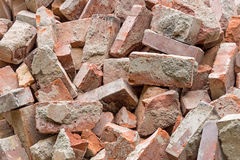 Miner: Dumping is Unsafe, Unhealthy, and Hurts the Quality of Life for All City Residents

SYRACUSE, N.Y. – Mayor Stephanie A. Miner announced that two men, Edward Evans and Christopher Jacobs, were arrested and ticketed for dumping construction debris on 4th North Street in the City of Syracuse. The men had left bricks and concrete on vacant parcels, including a City-owned lot, on the North Side of the City. During the course of their arrest, it was discovered Mr. Evans also had outstanding warrants.

“Keeping our neighborhoods clean and safe is important to me, my administration, and the Syracuse Police Department. We will not tolerate illegal dumping in our neighborhoods. It’s unsafe, it’s unhealthy, and it hurts the quality of life for all City residents,” said Syracuse Mayor Stephanie A. Miner. “The message we want to send is clear: We have zero tolerance for illegal dumping in the City of Syracuse. All incidents will be investigated and perpetrators will be caught and arrested.”

On June 8, police were called to Wolf Street and 4th North Street to respond to complaints about illegal dumping in the area. Officers from the Syracuse Police Department and New York State Department of Environmental Conservation (DEC) responded, along with staff from the Syracuse Department of Public Works (DPW). It was discovered that several loads of construction debris consisting of bricks and concrete were dumped in lots in the 200 and 300 blocks of 4th North Street.

A neighbor provided a description of a vehicle and license plate number, which officers investigated.  It was determined the vehicle’s operator was Christopher Jacobs, of 213 Freeman Avenue, Solvay. Mr. Jacobs was arrested for littering and dumping and given uniform traffic tickets from the DEC for dumping on a public road and unlawful disposal of solid waste. He was Mirandized on the scene and stated he had used a vehicle to help his father in law, Edward Evans, dump several loads of bricks and concrete.

Edward Evans, of 201 Fillmore Avenue, Syracuse, was reached by telephone, but refused to give his address and hung up on officers several times. Upon further investigation, it was discovered Mr. Edwards had two outstanding warrants for harassment in the second degree and aggravated unlicensed operation of a vehicle in the third degree. He was taken into custody and arrested for littering and dumping. The DEC ticketed him for dumping on a public road and unlawful disposal of solid waste. He was transported to booking without incident.