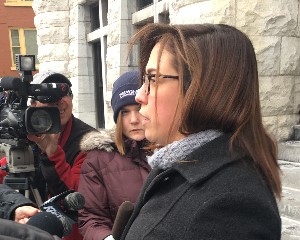 As predictions of a fast moving winter storm approaching our area hit the airwaves. City of Syracuse, Director of Operations Corey Driscoll Dunham was available Tuesday afternoon, to discuss preparations for the upcoming winter storm. Displaying caution the city assured residents that they’re prepared for the storm. However, the Director of Operations warned people about the importance of keeping roads clear of cars parked illegally, re-emphasizing the streets identified by city officials that have egress issues due to people not observing posted parking regulations. School closures and delays for Wednesday

Dunham also discussed the Snow Summit to be held later this month to gather ideas for handling our city’s snow removal challenge.

Update 9:38 a.m. : Some Syracuse area businesses and employers are beginning to tell their staff to leave early as the storm intensifies.

The administration also responded to questions regarding the use of Beet Juice as mentioned in the State of the City speech last week. Currently, the mixture is being used at limited locations, primarily around City Hall and City Hall Commons.

Traffic is being rerouted around the work area during the closure period.  New York State University Police officers are onsite to provide direction to motorists. Special travel arrangements are in place for EMS, ambulance, as well as fire and police access to the hospital Emergency Department.