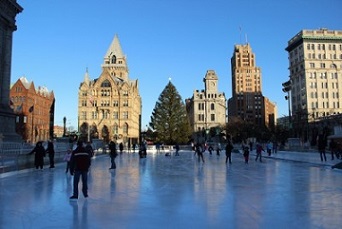 Annual Celebration, Headlined by the Blacklites, Culminates in the Lighting of the Clinton Square Tree

Miner: We Are Pleased to Kick-Off the Holiday Season for Central New York Right Here in Downtown Syracuse

SYRACUSE, N.Y. – The city of Syracuse will once again hold its annual “Home for the Holidays” celebration this Friday, November 24 in Clinton Square. The program will kick off at 6:30 pm and the tree lighting will take place at 7 pm. 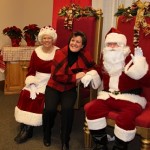 “This has been among my favorite events to be part of during my time in office. It is a great event for families and people of all ages to be part of and we are pleased to kick-off the holiday season for Central New York right here in downtown Syracuse,” said Syracuse Mayor Stephanie A. Miner. “I encourage everyone to come join us for a great program once again in Clinton Square.”

Home for the Holidays will be emceed by Heather Daley of 92.1 – the WOLF. This year’s Clinton Square performance will be headlined by the Blacklites.  The program will culminate in the arrival of special guests Santa and Mrs. Claus. Once they are on stage, they will join Mayor Miner, Chief of Police Frank Fowler, and Chief of Fire Paul Linnertz, as well as the student winners of the Mayor’s “Share Your Story” challenge to light the tree. The performance begins at 6:30 pm.

Following the lighting of the tree, the public is invited to join Mayor Miner at City Hall for an open house where they can have a photo taken with Mayor Miner and the Chiefs of Fire and Police as well as with Santa and Mrs. Claus between 7:00 pm and 8:00 pm Light refreshments will be served. The Stan Colella All Star Band will perform in the lobby. On display will be the winning entries of the Mayor’s “Share Your Story” challenge.