There were some who grumbled when the city announced they were going to use an artificial tree for Clinton Square’s annual tradition. From the look of things, the new addition to Clinton Square was a dazzling success.

The new 42-foot tall artificial tree with its more than 10,000 multi-colored LED lights and 1,200 ornaments on 400 panels of branches, was clearly the star of the square. “We are starting a new tradition around putting up the tree this year, and expect it to be one that the community will enjoy,” said Mayor Ben Walsh. Prior to the ceremony, “When we flip the switch to light the tree, it will be an exciting moment. And we’ll also have a great program of holiday activities occurring around downtown.  It’s going to be a great kickoff to the holiday season.” 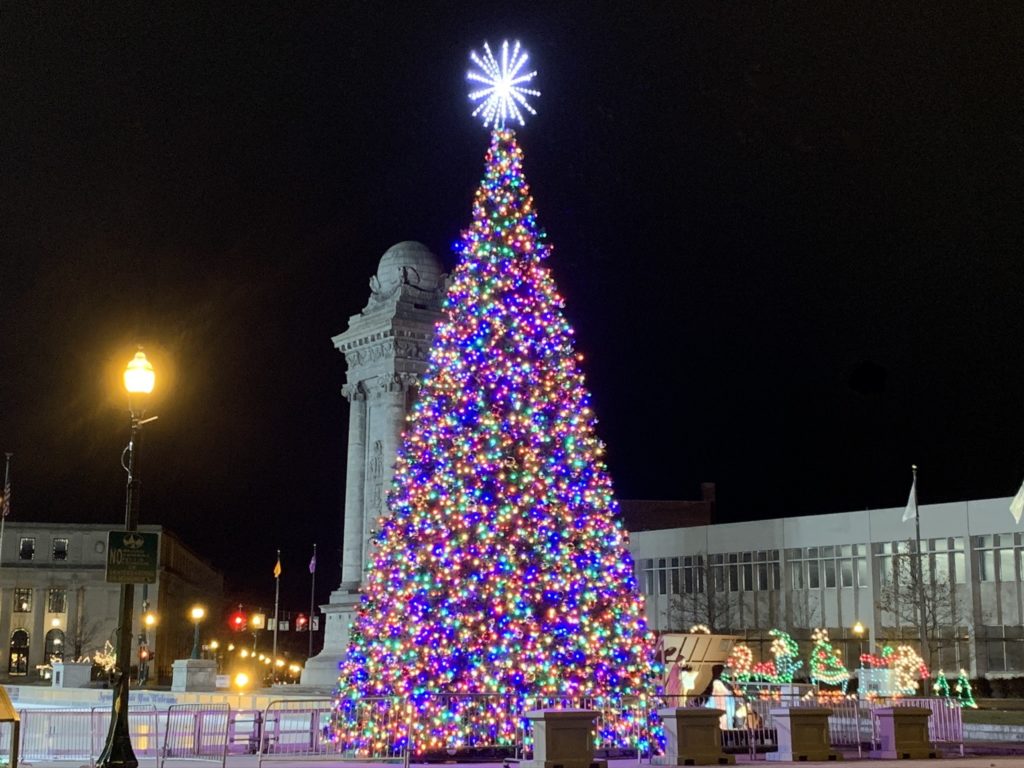 A pre-show included a singing and skating performance by Snow Queen and Snow Sisters, also known as the Ice Sisters, closing with a performance by Trumptight315. Entertainment and festivities continued throughout the evening in Hanover Square, City Hall Commons Atrium the annual Mayor’s Office Open House at Syracuse City Hall until 9 p.m.

Trumptight315, a Syracuse R&B/soul band from Syracuse, provided musical entertainment throughout the program, closing the event with a song. Mr. and Mrs. Claus are “coming to town” before heading over to City Hall.  As You Wish Entertainment’s.

Tom Kenny, Syracuse native, actor, comedian and the voice of the main character SpongeBob SquarePants, with Maria Maldonado-Lewis, constituent service advocate for the City of Syracuse were co-hosts of the event.

The City of Syracuse Department of Parks, Recreation & Youth Programs will offer a free showing of the holiday film, “The Grinch” at the Landmark Theatre on Sunday, Dec. 22. Doors open at 3 p.m. There will be activities, games, candy and Santa Claus will take pictures with the children. The movie will begin at 4 p.m. The activities and movie are free. Refreshments will be for sale in the lobby concession stand.