An information sheet classifying legal and illegal fireworks can be downloaded online.

An overview of the New York State laws defining the kind of fireworks allowed to be sold by certified retailers gave participants the legal guidelines displays must adhere to. Handheld or ground-based sparkling devices emitting colorful sparks are permitted, while booming aerial fireworks are prohibited for consumer use. These laws supersede any local laws and only county legislative governance can opt out of these state requirements. 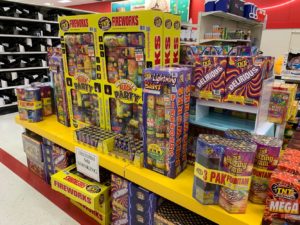 Recently Governor Cuomo created a new fireworks detail under the direction of the New York State Troopers. SPD summarized enforcement measures implemented, including a designated detail, to curb the quantity of illegal fireworks on the streets. As a result of having the detail in place, 16 arrests (appearance tickets) to-date and six seizures have been made; public safety information to prevent fires and a spike in common injuries to extremities was also provided.

“Illegal fireworks seem to have started earlier this year and have continued nightly.  Syracuse isn’t alone in dealing with the problem, and we are taking multiple actions to address it,” said Deputy Mayor Sharon Owens. “As we approach the July 4th weekend, I appeal to our residents to consider your neighbors and especially those severely harmed by fireworks. They’re dangerous to users and bystanders; torment pets; disrupt sleep and are especially harmful to veterans and those with PTSD. Our police will be out enforcing, and our firefighters will be educating.”

After conducting a citywide survey in mid-June to understand the impact firework demonstrations have had on community members, 1,113 respondents offered feedback related to instances of fireworks in various neighborhoods. The primary concerns listed from the survey effecting quality of life around focused on noise, safety (risk of fire and injury); impact on vulnerable groups; property damage; packages litter; blocked streets; and overall neighborhood relations. The survey will remain open to the public until July 1 to collect additional responses.

SPD will continue to respond to reports of fireworks through the special patrol with ticketing, and continued seizure of illegal fireworks obtained as a result of investigations. An information sheet classifying legal and illegal fireworks can be downloaded online.