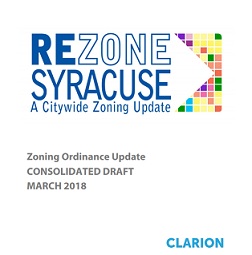 Syracuse, N.Y. – The City of Syracuse has released the Consolidated Draft of ReZone Syracuse. The draft document and map are available on the city’s website, located under the latest documents heading on the right-hand side of the ReZone Syracuse page.

Rezone Syracuse is a complete citywide zoning update, which embodies the Vision of the City’s Comprehensive Plan 2040 and its components. First undertaken in 2015, the project will comprehensively revise and update the city’s zoning ordinance and zoning map.

The city is hosting a public meeting regarding the release of the Consolidated Draft on Monday, March 12 at 6:30pm in the City Hall Commons Atrium. The city will hold additional public meetings in neighborhoods later this month. Details will be provided as soon as possible.

Funding for the ReZone Syracuse is being provided through a Cleaner, Greener Program grant from the New York State Energy Research and Development Authority.