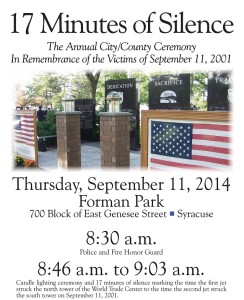 Ceremony Begins at 8:30 AM on Thursday in Forman Park

SYRACUSE, N.Y. – The City of Syracuse will hold its annual September 11 commemoration ceremony at the Forman Park Police Memorial on Thursday, September 11, 2014 beginning at 8:30 AM. The ceremony will observe seventeen minutes of silence, representing the time between the first and second planes to hit the World Trade Center.

Two pedestals will be erected representing the Twin Towers of the World Trade Center. The five-foot pedestals are topped with a flagstone. A three wick candle will be placed on top of that flagstone after being lit. Also on display will be the “Flag of Heroes,” which contains the names of all emergency service providers who gave their lives on that day, and the “Flag of Honor,” which contains the names of all civilian victims.