On the 20th anniversary of the Sept. 11 attack, the City of Syracuse held a ceremony at Fayette Firefighter’s Memorial Park to honor the thousands of innocent lives lost, including many first responders. 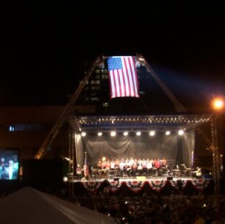 Photo is from the initial community reaction, we gathered at Clinton Square shortly after the tragic events of 9/11/2001