As Part of 2017 Parade Theme Recognizing Irish Workers on the Erie Canal, The City’s Annual Irish Heritage Celebration Will Be Held at the Erie Canal Museum

Miner: Fitting to Use Parade, Painting of the Stripe, Irish Heritage Celebration to Honor the Legacy of Irish Men and Women who Helped Build the City of Syracuse

SYRACUSE, N.Y. – Mayor Stephanie A. Miner announced the City of Syracuse will hold its annual Painting of the Stripe Ceremony and Irish Heritage Celebration on Friday, March 10 at 9:30 a.m. The Painting of the Stripe will take place at the intersection of South Salina and East Water Streets. Immediately following, the Irish Heritage Celebration, recognizing Parade officials and featuring performances from local Irish dancers, will be held at the Erie Canal Museum at 318 Erie Boulevard East – directly behind City Hall. 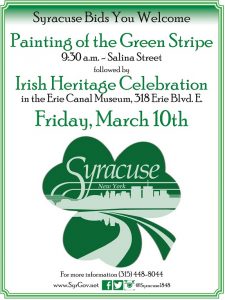 “I am always pleased to host the parade organizers and our Irish-American community for these annual events. This year, I will be honored to attend these events as the Parade’s Grand Marshal,” said Syracuse Mayor Stephanie A. Miner. “Our Parade, the Painting of the Stripe, and the Irish Heritage Celebration are long-standing traditions in our community and it is fitting to use these events honor the legacy of the Irish men and women who helped build the City of Syracuse.”

“35 years in a flash! From fifty people on Montgomery Street to 7,000 marching up Erie and down Nancy Duffy Lane, the Hunger Project, Shamrock Run, Hotel closed and reopened. One of the top ten parades in the United States. The dream of Nancy Duffy continues because of her: ‘If you try and do the right thing, it will all work out’ …and it has,” said Janet Higgins, President of the Syracuse St. Patrick’s Parade committee.

“The Erie Canal Museum is thrilled to be hosting Mayor Miner and the parade committee for the annual City of Syracuse Irish Heritage Celebration this year,” said Natalie Stetson, Executive Director of the Erie Canal Museum. “We are proud to welcome this event to the Syracuse Weighlock Building, in keeping with the Parade’s theme recognizing the contributions of the thousands of Irish workers who built the Erie Canal. The impact of Irish workers on the Canal – and our community – was monumental, and this year’s theme pays tribute to their lasting legacy in Syracuse.” 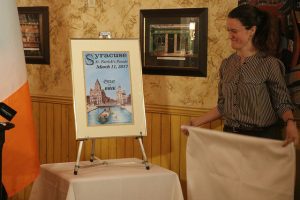 From Erie to Erie, Celebrating the Canal’s Bicentennial (click on image to enlarge)

The Painting of the Stripe is an annual tradition in Syracuse, where a green stripe is painted down the center of South Salina Street – the route taken by the parade. Mayor Miner, the parade Grand Marshal, Michele Jordan, the Gael of the Year, and leadership from the parade committee will be on hand to paint the stripe.  Immediately following the ceremony, all are welcome to attend the annual City of Syracuse Irish Heritage Celebration, this year held at the Erie Canal Museum. It will provide an opportunity to thank the Parade officials for their contributions. The event will also feature performances from local Irish dance schools.

This year’s parade theme is “From Erie to Erie, Celebrating the Canal’s Bicentennial.” When construction began on the Erie Canal in July 1817, it sparked the arrival of Irish workers who soon became a major part of the workforce. They settled in communities along the canal, raising their families and permanently altering the landscape of upstate New York – physically, economically and culturally. This year’s pays tribute to those workers and their lasting legacy in Syracuse.