Join many of the areas clergy as they hold a City-Wide Prayer Ceremony, welcoming newly elected and appointed leaders. The event is scheduled to begin, 4:00 P.M. at Bellgrove Missionary Baptist Church, 219 Martin Luther King West, Syracuse.

All are welcome. This began as one person asking for prayer prior to accepting a new position within the Walsh Administration. Members of the Faith Communities offered to have prayer, not just for the individual, but prayer for our entire community, the City-Wide Prayer was created.

Interdenominational Ministerial Alliance of Syracuse & Vicinity, Northeastern Missionary Baptist Association, Syracuse Concerned Clergy and other members of the Faith Community, will conduct a prayer service for our newly elected and appointed officials. This is a special occasion as Syracuse has its first African American Deputy Mayor, Sharon Owens, in addition to having our first African American Woman as Common Council President, Helen Hudson. 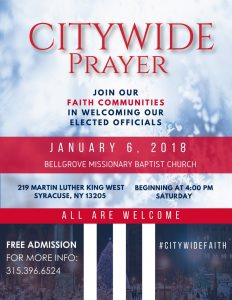 The focus of the event is to set a positive tone as we proceed into the New Year. This is a multi-faith affair and everyone is welcome regardless of their religious affiliation. This is prayer for our community, given some of the rough statistics being hurled our way; concentrated poverty, schools, and gun violence are just a few of the issues our elected officials are grappling with, as we, as a community are heading into uncharted territory.  No one knows what’s going to happen in Washington D.C., as threats of budget and program cuts can severely impair the ability of cities like Syracuse to survive.

We have concentrated poverty in a city that’s viewed by many as being poor, with many struggling to find their way in this new economy. The recent election tapped into energy of people from every demographic who in a diverse coalition elected the first Independent Mayor of Syracuse in 100 years.

We have more people of color, in positions of responsibility than ever before in our history. After decades of voting for Democrats, it takes an Independent to include the Black community in the day-to-day operations of the city of Syracuse. The level of diversity in appointments made by Mayor Ben Walsh has given the African American community a “seat at the table” at levels never before, seen in the history of Syracuse.

One observation, after the election of Ben Walsh as Mayor, people appear to be more optimistic about the future of Syracuse, a new beginning. And for many, prayer is the best way to begin the New “history making” Year of 2018.