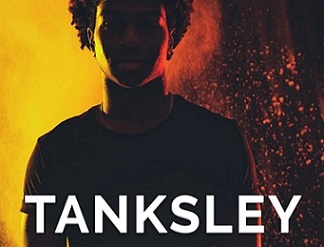 Join CFAC on February 16 at 5:30pm for a night of great Music! TANKSLEY is a young singer-songwriter born in the Central NY region. He is a self-taught guitarist and pianist creatively blending Jazz, R&B, Rock and World music influences.   At the age of 15, he began playing the family piano and received a guitar as a gift.

Over the past few years he has spent countless hours honing his skills while writing and performing wherever possible. Tanksley’s vocal abilities have been described as “smokey”, “smooth” and “addicting”.   He is honored to have been a student of local jazz great, Ronnie Leigh and is currently being mentored by Carlos Alomar (David Bowie’s guitarist, musical arranger and collaborator for decades). 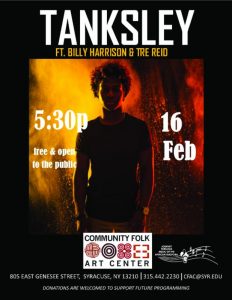 While escaping the need to be bound by genre-specific parameters, Tanksley finds freedom in his music and delivers a fresh and contemporary style all his own.  Rich with a variety of influences, Tanksley’s  music is straight from his soul.

Over the past few years, Tanksley has headlined at the New York State Fair, as well as performing in Manhattan at Toshi’s, Webster Hall and the legendary Minton’s Playhouse.   Other venues include Syracuse University and Steven’s Institute of Technology.

He has performed numerous shows locally including venues such as Funk n’ Waffles and private events as he hones his vocal and instrumental abilities.  Tanksley’s performances create an energy that engages the audience whether he’s playing an acoustic set or with the synergy created with his band members that include gifted, multi-instrumentalist Billy Harrison and uber talented drummer, Tre Reid.  Currently, Tanksley is in production for his first EP which will include his original songs.

This event is free and open to the public.