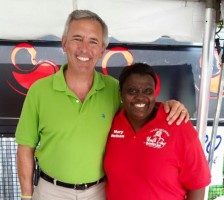 Washington, DC – This evening, U.S. Rep. John Katko (NY-24) will be joined for the President’s State of the Union address by Mary Nelson, President and CEO of Mary Nelson’s Youth Center in Syracuse and founder of the annual Youth Day BBQ and Backpack Giveaway.

Syracuse has the nation’s highest concentrated poverty among blacks and Hispanics, and about half of the city’s children live in poverty.

Since coming to Congress, Rep. Katko has made addressing systemic poverty a top priority.  He has been a leader in advocating for funding to address the lead paint crisis. He worked across the aisle to reauthorize CHIP, fought for a $20 million boost for early education, and led efforts to increase preschool funding. He’s advocated for an expansion of P-TECH job-training programs so students can fill high-skilled jobs, fought to ensure SNAP benefits are available for the most vulnerable members of our community, and prioritized an investment in housing. 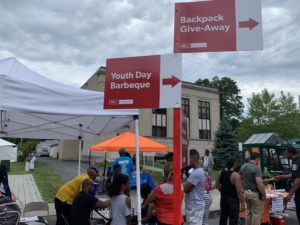 Mary Nelson’s Back Pack Giveaway has become an annual event, leveraging the participation of hundreds of volunteers and over a dozen organizations.

A community leader working to address poverty and reduce youth and gang violence in Central New York, Mary Nelson has implemented programs designed to bring the community together and empower children. In 2002, after losing her nephew to gun violence, Mary was inspired to launch her first annual Youth Day BBQ and Backpack Giveaway, a program that prepares students for school by ensuring they have the supplies they need to be successful. For nearly 20 years, Nelson’s program has supported thousands of students in Central New York.

“For nearly two decades I served as an organized crime prosecutor in Syracuse, overseeing the Gang Violence Task Force. I saw how generational poverty deflates opportunity and destroys self-worth. For years, Mary has worked on the front lines to combat poverty and has been an impactful and thoughtful leader in addressing youth and gang violence,” said Rep. Katko. “I have been proud to stand alongside Mary at her annual Youth Day BBQ and Backpack Giveaway and to partner with her on the federal level to get Central New York the necessary resources to tackle poverty. Systemic poverty does not just hurt those who live it – it hurts our entire community.  We need to prioritize policies that support growth in our communities and provide stepping stones out of poverty and towards economic opportunity.  But these policies rely on partnership with organizations and advocates like Mary that do incredible work to lift families out of poverty, and I am humbled to fight alongside her.”

“I am grateful to be in attendance for the State of the Union Address and look forward to joining Rep. Katko to continue our work together to end poverty,” said Mary Nelson, President and CEO of Mary Nelson’s Youth Center. “Addressing poverty starts with helping the children who live it.  In Central New York, many children are left without the proper resources they need to feel safe and grow. I care deeply about the youth in our community and came to Washington to learn about ways in which I can continue my work to empower children. Thank you to Congressman Katko for inviting me and for focusing in Congress on ways to address poverty in Central New York. Working together is the only way we can rid our community of poverty.”