“Looking Back, Moving Forward: 50th Anniversary Commemoration of the Civil Rights Movement 1964-2014,” a conference spearheaded by the Cold Case Justice Initiative (CCJI) at the College of Law, will be held Friday, March 21, through Sunday, March 23, on the Syracuse University campus.

Within the Civil Rights Movement, 1964 was a momentous year. Major events that happened that year include the Freedom Summer, a campaign in Mississippi to register African Americans to vote; the murders of civil rights activists as well as other victims not involved in the movement; passage of the 1964 Civil Rights Act; launching of the War on Poverty; and Martin Luther King Jr.’s acceptance of the Nobel Peace Prize. 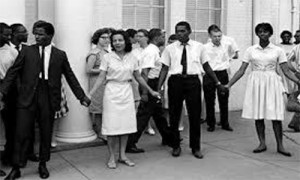 Diane Nash, center, leads a group of students in a protest in front of the Nashville, Tenn., police station in 1961. The students were protesting police brutality against protesters at lunch counters. (Photo by the Tennessean).

The conference will provide educational awareness about the Civil Rights Movement and era, and will include presentations, workshops, cultural performances and intergenerational dialogue with students, faculty members, community activists and grassroots leaders on social justice issues. Family members of victims of Civil Rights-era cold cases will be in attendance.

Additionally, an essay contest in three age categories, 11-14 years, 15-18 years and 19 years and older, will be held in conjunction with the conference. The deadline for essay submission is March 3. Visit http://www.syr.edu/coldcaselaw/essaycontest.html for more information.

Conference events will include:

Friday, March 21—The day’s events will include panel discussions on “Why This Conference—1964 in Context,” “Civil Rights Era Cold Cases,” a cultural performance by Vanessa Johnson and a Martyr’s Roll Call. These events will take place at the SU College of Law.

Also on Friday, an exhibition, “Making the Movement: Objects, Objectives and Civil Rights,” curated by David L. Crane, professor at Alamance Community College in North Carolina, will be on exhibit at the Community Folk Art Center, 805 E. Genesee St. Professor Crane will provide an introduction to the exhibition. “Poetry Jam for Civil Rights,” coordinated by Cedric Bolton of the Office of Multicultural Affairs, also will be held at CFAC that evening. Poets interested in performing can contact Bolton at 315-443-9676 or ctbolton@syr.edu.

Saturday, March 22—Events will include morning and afternoon workshops on social justice issues, a panel discussion on “Political, Artistic and Journalistic representations of the Civil Rights Movement and Era,” a master class in nonviolent activism and an activists’ roundtable discussion. Saturday events will take place at the S.I. Newhouse School of Public Communications.

A dinner that evening will honor such Civil Rights Movement icons as the Rev. C.T. Vivian and Diane Nash, as well as local social justice activists. Vivian was close to Martin Luther King Jr., and was active in the Freedom Rides and other demonstrations during the Civil Rights Era. He was a leader in Student Nonviolent Coordinating Committee (SNCC) and the Southern Christian Leadership Conference (SCLC), and last year was awarded the Presidential Medal of Freedom. Nash was a leader in the nonviolent freedom movement and was a founder of SNCC. She is nationally regarded for her courage during the Freedom Rides in the face of bombings and other violence. Bernice Johnson Reagon, founder of the Freedom Singers and the a cappella group Sweet Honey in the Rock, and her daughter, artist Toshi Reagon, will perform together at the dinner.

Sunday, March 23—The conference will conclude with a town hall meeting to discuss conference experiences and agenda items for further action.

The Cold Case Justice Initiative at the College of Law is an interdisciplinary program that investigates unsolved racially-motivated murders that were committed during the Civil Rights Era. Professors Janis McDonald and Paula Johnson are the co-directors.

The conference is free and open to the public, but registration is required. Visit http://www.syr.edu/coldcaselaw or contact Sheila Welch at 315-443-5019 or swelch@law.syr.edu for more information about the conference and/or to register.