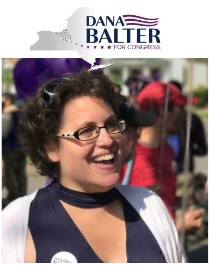 (SYRACUSE, NY) – Since announcing her candidacy in September, Dana Balter’s campaign is picking up steam and to date has raised over $115,000, out-raising all of her other Democratic opponents in the 4th quarter of 2017. Balter is running in the 24th Congressional District, which is currently occupied by the vulnerable Republican incumbent John Katko.

“With over 100 volunteers and over 900 donors, we are building a grassroots campaign, focused on issues that matter to the people of the 24th — better wages, better schools, and a chance to get ahead,” said Balter

A former special education teacher and a current professor at Syracuse University, Dana Balter is running for Congress to ensure that every child has the opportunity to succeed. Dana will fight for access to quality affordable healthcare, protect our natural resources, and work to build an economy that works for everyone – not just billionaires and corporations. Like thousands women in the wake of the November election, Dana felt the need to get involved and take action, which is why she’s running for Congress.

“It’s inspiring to see people getting involved in this campaign who have never previously been involved in politics. People from across the district are raising their voices to demand change. I believe channeling this grassroots energy into electoral change is key to winning this seat in November,” said Balter.

The 24th District includes all of Cayuga, Onondaga, and Wayne counties and the western part of Oswego County. New York’s 24th Congressional District is one of 23 Republican House districts that Hillary Clinton won in 2016.