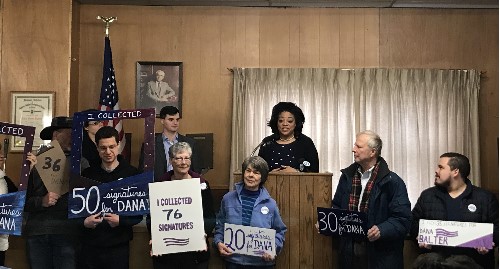 Syracuse, N.Y. –– On Tuesday April 10, 2018 at the Teamsters Local 317 union hall, the Dana Balter for Congress campaign was joined by several elected officials, community members, and grassroots organizers as the campaign prepares to deliver over 8,000 petition signatures to the New York State Board of Elections in Albany. The campaign easily surpassed the 1,250 required to get on the ballot in November.

During the last six weeks, excitement about Balter’s campaign has grown, as over 800 people have canvassed district-wide in all four counties to gather support for the Democratic Party’s designated candidate.

“Dana Balter’s campaign is truly people powered and we should be proud ourselves and proud of Dana Balter for collecting an unprecedented number of signatures” said Cayuga County Chair Ian Philips. 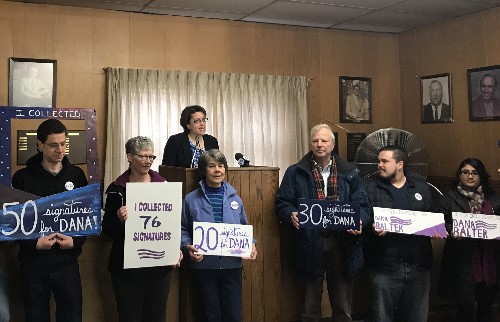 Dana Balter speak to supporters at Petition Event where over 8,000 signatures were presented.

In February, Balter’s campaign received the endorsements of all four county Democratic parties in the 24th congressional district, as well as the support of grassroots groups such as Uplift Syracuse and Knit The 24th. Dana Balter is also one of the first five candidates ever endorsed by The Indivisible Project, the national arm of the Indivisible movement.